By Admin
August 10, 2022news
An eleven-year old boy died after getting circumcised in a health center in Lupon town in the province of Davao Oriental, Philippines.
The father of the boy whose name was not disclosed was in a state of disbelief after his son died of tetanus a few days after the circumcision.
Armando Ilisan said he thought that it was just normal for his son to feel discomfort after the circumcision until the pain turned severe.
He alleged that the midwife did not notice that the foreskin of his son's private organ was not ready to undergo operation. 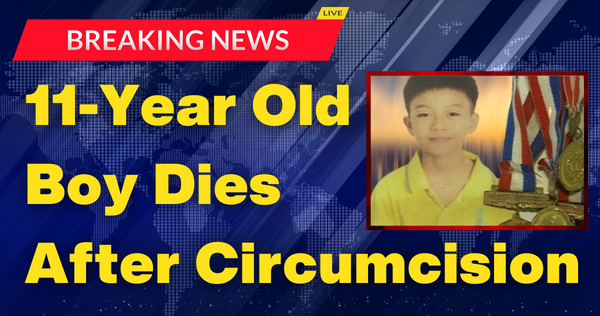 However, the rural midwife identified in local news as Angelina Uyanguren said she did not do anything wrong as there were no complications following the procedure.
The boy's death certificate showed that the cause of his death was "respiratory failure due to tetanus." It was possible that tetanus and other bacteria that entered the wound in the boy's genital contributed to his condition, the report said.
The mother, Lea Dugan, was not able to do anything but recall memories of his son's dreams for the future as it was a very sudden death.
The health department is reportedly investigating the incident while the local government unit vowed to provide assistance to the boy's family.