By Admin
July 28, 2022newsPhilippinesstarlinktechnology
Starlink kits and internet service will be available in the Philippines starting December 2022, according to SpaceX and Department of Information and Communications (DICT).
This means Filipinos, including those living in far-flung areas, will be able to browse the world wide web and use online services faster.
During a press briefing in Manila on Wednesday, July 27, Starlink Internet Services Philippines Inc. representative Rebecca Hunter said SpaceX will launch Low Earth Orbit satellite services before the end of the year.
Hunter told the DICT and members of media that a Starlink kit would cost US$599, or Php34,000 which is a one-time payment, while the monthly subscription would be US$99, or Php5,000 with no data cap.
Download speeds are expected to be between 100 to 200 megabits per second (Mbps), but actual speed tests based on YouTube testimonial videos of Starlink subscribers in the US show an average of 250 Mbps download and 40Mbps upload, sometimes higher.
A televised report on SMNI News revealed that the Philippine version of the Starlink kit is different from the original design - it has a rectangular shape as compared to the circular dish that is available in the US. Watch: 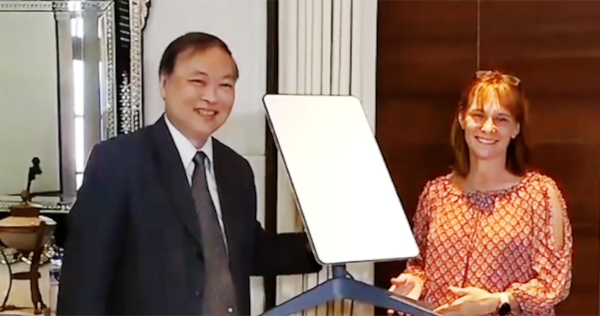 It is highly unlikely, however, that the design difference would matter in terms of speed and performance.