By Admin
July 13, 2022newsviral
Problem solved! Some smart-thinking Filipino inventors proudly introduced the "all-new" P1,000 Polymer Banknote Protector on social media.
This happened after netizens raised concerns over reports that a mall rejected a folded P1,000 Polymer bill from a customer.
The Bangko Sentral ng Pilipinas posted on its website strict guidelines on the "proper handling" of the Polymer bill.
"DO NOT excessively fold, crease, or crumple polymer banknotes. These could leave permanent fold marks," the BSP warned.
It is also prohibited to "deface, write on, or mark polymer banknotes" and tearing, cutting, or poking holes in polymer banknotes are likewise not allowed. Read more about the prohibitions on this BSP webpage.
However, the financial authority called on banks and business establishments to accept Polymer P1K bills for day-to-day payment transactions following the backlash.
This new development though did not prevent intelligent Pinoys to create something that would "protect" the newly-released P1,000 Polymer bills.
Costing one peso less than the money's value, the creator said their product "prevents accidental folding," is "staple proof," with a "chemical resistant shell," "IP67 waterproof rating" or certification, and "proudly Philippine made" as its "key features." 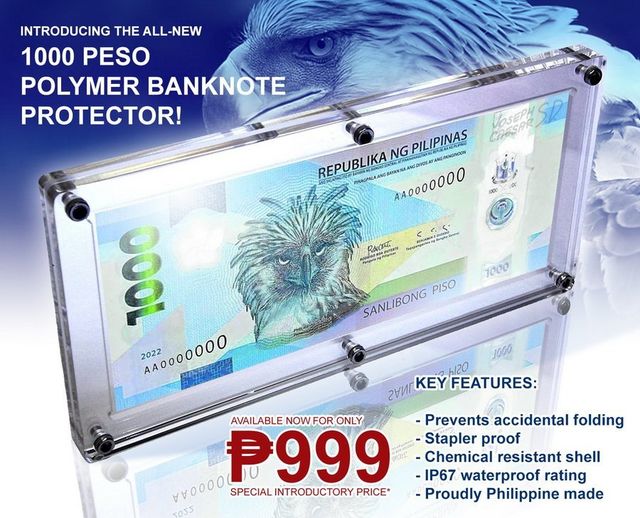 Many netizens do understand that it was meant as a joke or sarcasm as the Facebook page did not include information on how and where to order it, but who knows.