Man Discovers Knife Still Inside His Body After Surgery

By Admin
March 24, 2021kent tomaonews
A man from Kidapawan, Philippines was shocked to discover that a knife is still inside his body a year after his surgical operation.
Kent Ryan Tomao, single and a resident of Barangay Amazion, Kidapawan City, applied for a job at Philsaga Mining Corporation in Agusan Del Sur with high hopes to make ends meet.
When the x-ray result, which is one of the application requirements, came out, a knife was seen inside his body. 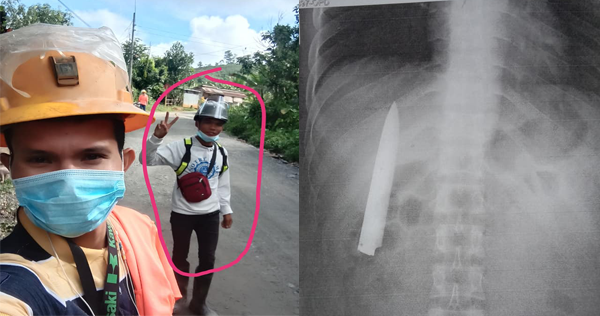 According to sources, Tomao was stabbed by unidentified bystanders on January 4, 2020 while walking on his way home.
He was rushed to a public hospital where his stab wound was stitched. However, the doctor allegedly did not notice that the knife used in the crime was left inside the victim's body.
Tomao failed to get the job.
He is now planning to return to his hometown and go back to the hospital to have the knife removed from his body.
A friend, Luis Fuerte Jr., who is working at Philsaga, posted on Facebook photos of Tomao and the x-ray result to seek help from from netizens and the program of famous multimedia personality Raffy Tulfo.