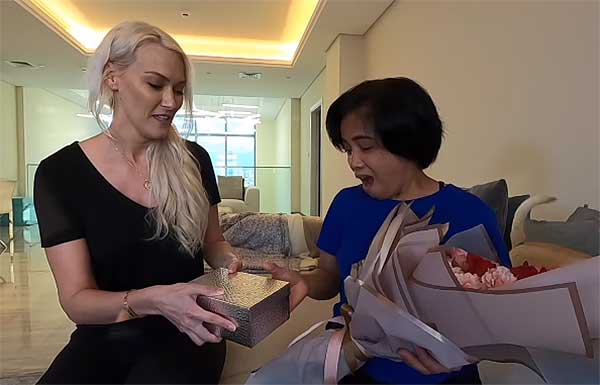 In a video posted Wednesday on her Facebook page, Alex Hirschi staged a fake interview for what looked like a documentary. Her employee, who came from the Philippines, did not know that the video was about her.

"Look at this guys! This is an entire college fund for a very special employee of mine. Now what we've done is we've set up these lights. She thinks we're filming a documentary so all my employees are gonna come through this door for their 'interviews', but that's all for show. It's actually about her and this surprise, alright. It's going to be a massive surprise for her," the Australian star said as she holds the cash before putting it a box.

According to Supercar Blondie, Avelina is 50 years old and has moved to Dubai to work and save up enough cash to send her son to college. The exact amount was not revealed, but the 35-year-old vlogger and TV show host said the money would be enough to cover the college education of Avelina's son.

In an interview, one of Supercar Blondie's male staff described the Filipina household assistant as "a machine who does not stop working," saying she deserved "every bit of the surprise." A female employee also described Avelina as a welcoming and happy person who "always got a beautiful smile on." Another male staff member said she is "the heart and soul" of their office. "What I appreciate about Avelina is how hard she works and how positive her energy is everyday," said the fourth employee during the interview.


We believe that it was the first time Supercar Blondie did a feature about her Filipina employee since she is best known for her automotive videos that are posted on Facebook, Instagram, and YouTube on a regular basis.

Avelina "means so much to me," she said. "I couldn't do what I do today without her. She's been working with me for two and a half years and she does everything. She runs around town doing errands, she does the PA [personal assistant] and admin work, she even cleans the office and she makes food for us all... she even takes care of our dogs when we travel so she is so integral to the Supercar Blondie family."

During the staged interview, Avelina said she has two sons living in the Philippines. The eldest is 29 years old and the second one is 15. She said it has been three years that they have not been together but they get connected online almost everyday. Her children, she said, was "very jealous" by the time they knew that her boss is Supercar Blondie.


The 'interview' was interrupted when Supercar Blondie entered the room and gave Avelina a bouquet of flowers. It was then revealed that the supposed documentary and interview were fake and is actually meant to be a special feature about her.

"This is actually a video to appreciate you because we love you so much and you've done such an amazing work for us over the last 2 years. We love you and thank you so much," Alex said.

She then handed the box full of money over to Avelina, who got surprised and proudly said, "I'm a millionaire now Sir!"

"This is enough money to send your son to college or to help you build the house you want back home when you retire," Supercar Blondie told her Pinay employee.

"I'm going home?," Avelina jokingly asked. "No! I don't want you to leave," Alex replied. "If you leave me I'm taking this [the money] back!"

What a sweet and thoughtful gesture!

Watch the full video below: