By Admin
May 01, 2020Coronaviruscovid19newsStar Warsvideoviral
Viral now: Frontliners dressed as Star Wars stormtroopers are manning COVID-19 quarantine and curfew checkpoints in the Philippines.

Creative minds in some of the country's localities thought of having the village deputies wear stormtrooper costumes to raise awareness among people to abide by quarantine rules and policies imposed by the government in order to curb the Coronavirus infection.

Instead of their usual uniforms, barangay security personnel called tanods wear the outfits, based on the uniform of the fictional soldiers in the iconic George Lucas franchise, while guarding entry points to inspect vehicles, conduct temperature check and see whether drivers carry their home quarantine pass as required by executive order.

Even officials of the local government unit organization, the Sangguniang Kabataan, thought of the idea and improvised it by using cardboards and paint in creating the Star Wars stormtrooper costumes. 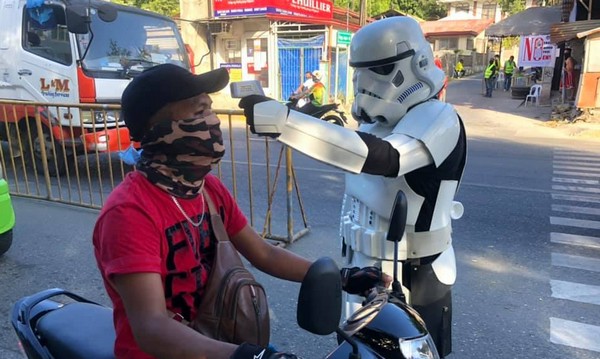 At first, residents were surprised to see the frontliners in their unique costumes but were amused eventually. A local official said their purpose is to drive away fear among their constituents and emphasize that their enemy is the deadly virus and not the men in uniform.

Recently, there were reports of abuse on both sides of law enforcers and some people who were caught violating quarantine and curfew rules. A few of these incidents were caught on video and published on social media sites such as Facebook and Twitter.