By Admin
May 12, 2020NBInewspresident duterte
The National Bureau of Investigation (NBI) has arrested the man who promised a P50 Million reward to anyone who can have President Rodrigo Duterte dead.
According to Facebook user Ronald Allan Sison, who posted photos and a video of the arrest, the NBI Central Office ordered NBI Pangasinan Chief Rizaldy Jaymalin to transport the suspect of "P50M REWARD SA MAKAKAPATAY KAY DUTERTE" ASAP to Manila. 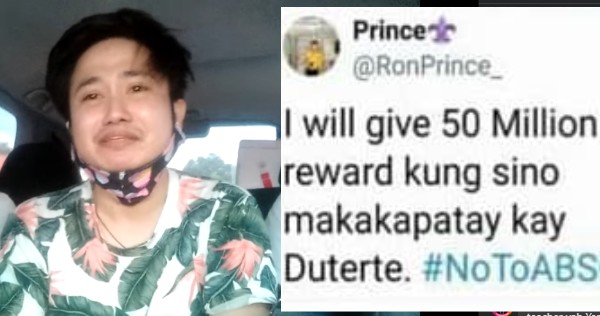 Sison said the arresting team searched the whole Dagupan City and went to possible leads before they were able to find the suspect identified as Ronnel Mas in Sta. Cruz, Zambales on Monday, May 11, 2020.
He said they informed the Barangay Poblacion Norte Council of Sta. Cruz and finally located the suspect.
At first, he said Mas cleared his name and insisted he was innocent, but appeared rattled as if he was puzzled about what was going on.
Sison narrated that the NBI team brought the suspect, accompanied by his parents, in their convoy. They later applied reverse psychology on Mas and the latter admitted the crime.
The suspect's parents also revealed that he already made an admission a day earlier. According to them, Mas had sleepless nights after receiving death threats on social media. He destroyed his iPhone 8 Plus, which was shown to NBI agents as evidence.
A deeper investigation is underway, Sison said.