By Admin
May 05, 2020ABS-CBN shutdownnewsNTC
ABS-CBN goes off the air after the National Telecommunications Commission (NTC) ordered the Kapamilya Network to cease broadcast operations.

The multimedia giant pulled the plug after airing its long-running news program TV Patrol on Tuesday evening, May 5, 2020, a day after their franchise expired and hours after the regulatory body directed them to stop television and radio broadcasting operations nationwide sans a "valid Congressional Franchise required by law."

Republic Act No. 3846 or the Radio Control Law, as cited by the NTC, states that "no person, firm, company, association, or corporation shall construct, install, establish, or operate a radio transmitting station, or radio receiving station used for commercial purposes, or a radio broadcasting station, without having first obtained a franchise therefor from the Congress of the Philippines."

In a statement, ABS-CBN said the NTC did not grant ABS-CBN a provisional authority to operate while its franchise renewal remains pending in Congress "despite Senate Resolution No. 40, the House of Representatives' committee on legislative franchises' letter, the guidance of the Department of Justice, and the sworn statement of NTC Commissioner Gamaliel Cordoba." 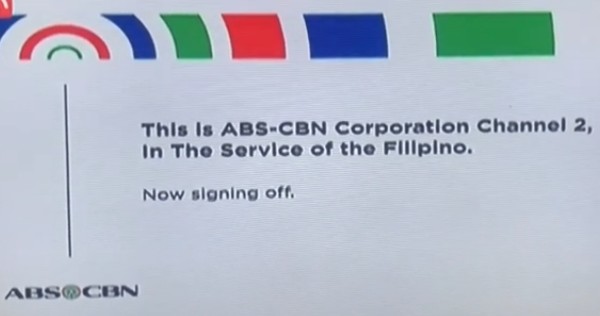 Before the shutdown, ABS-CBN said it will stop broadcast operations in compliance with NTC's cease and desist order, which covers 42 television stations, 10 digital broadcast channels, 18 FM stations and 5 AM stations.

Televiewers were shocked to find out that programs shown on SKY Direct, ABS-CBN's direct-broadcast satellite subscription television service, and its encrypted digital terrestrial TV provider ABS-CBN TV Plus, even those that are owned and operated by other broadcast companies, have been taken down.