ABS-CBN Employees Assured of Benefits, No Retrenchment After Shutdown

By Admin
May 06, 2020ABS-CBN shutdownnewstrending topic
Multimedia giant ABS-CBN assured its employees of benefits, including medical, and no retrenchment for three months after the shutdown.

Our bosses in a live chat with employees after broadcast ended:

"For the next three months, wala pong mawawalan ng trabaho due to retrenchment."

Never been prouder to be a Kapamilya. 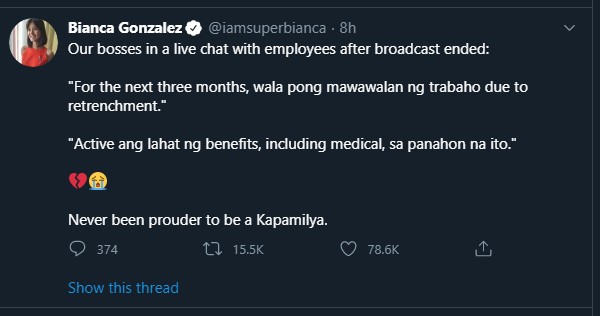 As of Wednesday morning, May 6, her tweet already garnered over 78,000 likes and was retweeted more than 15,000 times.

ABS-CBN stopped cable, television and radio operations nationwide after the National Telecommuncations Commission issued a cease and desist order following the expiration of their legislative franchise last Monday, May 4.

The Philippines largest broadcast network has gone off the air after airing the last episode of its primetime news program TV Patrol. Gonzales posted her status nearly an hour later.

What was surprising is that, according to other ABS-CBN employees, the "discussion" Gonzales tweeted about was supposed to be "internal" only.

Hi Ms. Bianca! I hope you notice me. I'm an employee of ABS, too. I also watched the Chat with MLL and CLK. As far as I know, per Sir Robert Labayen, the discussion was for employees only and di pwede irecord/ilabas. Thank you po!

A certain @migueliamrebel, who posted a video taken from the ABS-CBN Newsroom also posted:

Kindly delete this, internal lang yung usapan, may notice to everyone! Salamat! 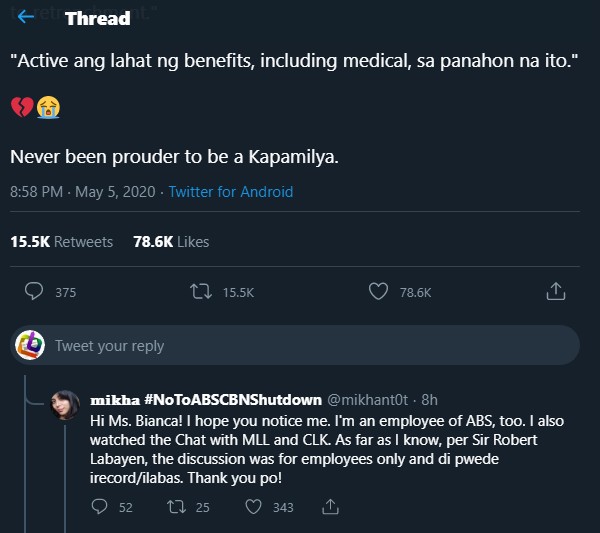 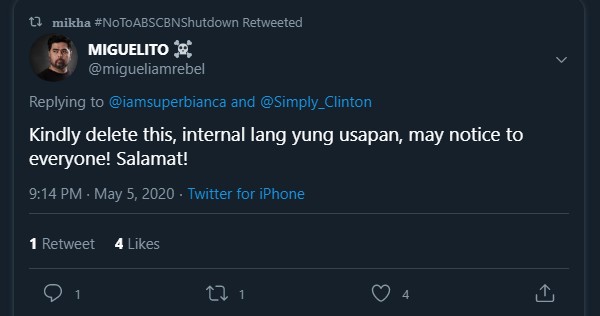 Will Gonzales be in big trouble with her bosses following her controversial tweet?