By Admin
January 30, 2020DOHnCoV virusnewsPhilippines
The Department of Health confirmed on Thursday, January 30, 2020, the first case of the 2019 Novel Corona Virus (nCoV) in the Philippines.

During a press conference, Health Secretary Francisco Duque III said that a Chinese national has been infected by the deadly virus, based on the result of the laboratory test conducted in Australia. 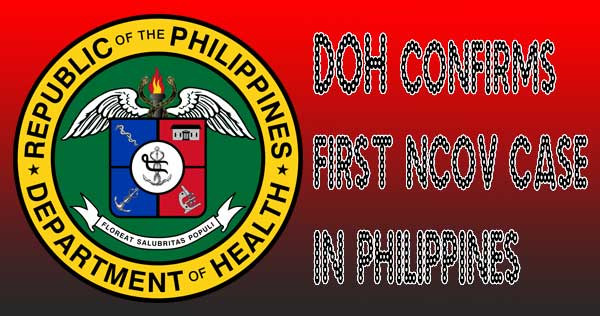 The patient, a 38-year-old woman from Wuhan China, arrived in the country via Hong Kong last January 21. She was having a mild cough and went to the hospital four days later for a checkup.

"The patient sought consult and was admitted in a government hospital last January 25 after experiencing mild cough. She is currently asymptomatic which means she has no fever and other signs and symptoms," Duque said in the presscon aired live on PTV4.

"The DOH continues to guarantee the public that all necessary precautionary measures are being taken to halt the spread of the virus," he added.

The health department is now tracking people who may have been in contact with the nCoV patient who also traveled to the cities of Cebu and Dumaguete in the Philippines.