"As the family is making arrangements to bring him home, no details can be announced yet. Only that he passed from natural causes," his wife, Tesa, said in a Facebook post on Tuesday, October 8. 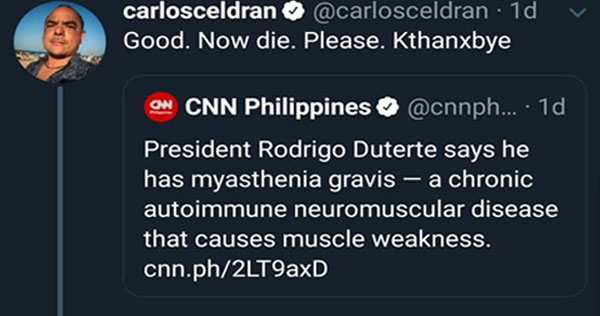 Celdran, who is well-known for his no-holds-barred statements against the present administration and the Catholic Church, was heavily criticized by
Duterte's supporters instantly after his controversial tweet and even after he died. On the other hand, we was praised by administration critics for voicing out his sentiments against the President.

"At least, before he died, Carlos was able to do things that made him truly happy - among them was to wish [for] President Digong's death," pro-administration Facebook page Duterte Today posted.

"What he posted on Duterte's illness was wrong. But he was certaily a better person than you. He dedicated his life to his art. He love his country as we all do, he just had a different attitude towards the policies of this administration," a certain Henry said.

Carlos Celdran passed away due to heart attack according to news reports on mainstream media. He was living in Madrid, Spain, since January this year.