By Admin
November 08, 2018manny pacquiaonewsoxfordspeechestranscript
Here's the transcript of the inspiring speech of Senator Manny Pacquiao as delivered at the Oxford Union in England on November 5, 2018. 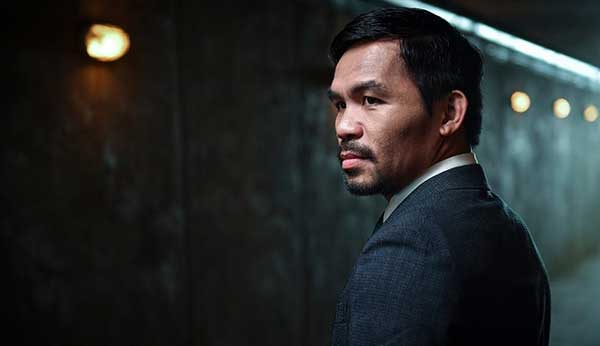 President Horvath and the other esteemed officials of the University of Oxford; distinguished members of the Oxford Union, other dignitaries in attendance and ladies and gentlemen, good afternoon.

I have fought some of the best fighters in history. And yet I have to admit, as I stand before you, I am intimidated when I think of the kind of main event headliners who faced you over the years:


And here am I, Emmanuel Dapidran Pacquiao, standing before you armed with just the equivalent of a sixth form education, an undisguised respect for what your group and your university represent and a pretty fair left hook.

If this give-and-take today were a “tale of the tape,” I would be a respectful underdog. But be careful. I am not that easy to floor.

When I received your gracious invitation, I asked myself, what could I talk about that could possibly interest you? What could Manny Pacquiao say that would be of any impact, much more utility, to the men and women who enjoy the highest standards of instruction at Oxford?

The answer came fast: I know what I should speak about, something very few among you can claim to know about: my education, certainly non-traditional, non-formal, largely unstructured. I will call it my education in the Open University of Life.

It is a matter of record that I only had traditional formal schooling until Secondary School, Grade 12.

It was only recently that I reached University level through the alternative education program.

We were dirt poor. I had to work since the age of five, to help my mother feed my three siblings and me. Many days, I was lucky to have one full meal. On days when we had no food, I would drink lots of water just to fill my stomach. But my mind and spirit were never hungry. I read anything I could get my hands on.

I even read the newspaper that my lunch or dinner came wrapped in. I read signs everywhere, even on moving vehicles. I learned measurements and weights by constantly reading the rates and tariffs at the warehouses where I worked as a stevedore, a docker in your parlance.

At night when I could not sleep because of the cold, I would read the labels on the carton boxes that served as my bed on the street pavement.

The movements of the clouds, the tint of the horizon, and the clarity of the stars taught me when morning was about to come.

And for me, the morning did come. Warm, bright, and simply amazing ——- a lesson in what can be achieved if you have determination … if you ignore the odds against you …and as you are taught here at this magnificent institution never, ever quit.

Think of David and Goliath. Look at me. I am not very big and I never had five smooth stones to throw at any obstacle, but determination Is a power tool. I won a lot of fights.

Since 2016, I have been a sitting member of the Philippine Senate, having received the direct vote of over 16 million Filipinos. As such, I participate in debates that result in the passage of legislation which determines the course of our country’s history and, indirectly, the world’s.

I do not fault anyone who views me as singularly ill-equipped for this role. Instead, I ask: is there anyone more knowledgeable than this humble civil servant about the hardships incident to the way of life of the majority of our people? Who among my colleagues have faced poverty face to face from birth? Whose life’s work has it been to battle illiteracy?

In crafting effective laws, there is no better guide than the pulse of the masses.

I may not have financial acuity. I may not be historically fluent. I may not even be socially adept. But I am philosophically rooted in my personal adversities, which morally bind me to the general struggle of our people.

I am a fighter, not just because it is my profession. I was a fighter long before I first set foot in a boxing ring. All my life I have fought to live. Every single day in my youth, I fought for survival. Now, I do it and get paid for it. Then, I was lucky to get a piece of bread for it.

But how are my struggles of any value to the Filipinos? It cannot feed or clothe all of them. No matter how much I give financially, hundreds of thousands more remain wanting.

In 2013, in the aftermath of Category 5 super typhoon Haiyan (locally remembered as Yolanda), the deadliest typhoon to devastate my country, leaving a record of more than 6,000 dead, I went to Tacloban and visited a nightmare.

The place was a virtual ghost town. Everyone had lost someone from their family; others, their entire family. No property was spared. There were bodies everywhere. There was no food, no water, no electricity. Each face I looked into bore the same expression: defeat. Not a single person there thought that they could ever recover from that tragedy.

I thought to myself, I can give millions, as have many other donors from all over the world, but no amount of money can give these people hope. I, too, fought against despair.

But then I had an idea. We set up a makeshift basketball court and I started shooting some hoops. Then one boy picked up the ball after one of my shots and tried a shot. Soon there were enough of us to have a five on five matches, and we did.

The smiles, the laughter, the whoops of joy of those boys during that game are memories forever etched in my heart. To have lost everything overnight, including parents, siblings, friends, but to still have the ability to rise above one’s personal loss and reach out to your fellow man, even just in play, to find joy together, there, at that point, in those victims’ eyes, I found hope.

Those boys, who had nothing left, gave me hope.

Four years later, I would see the same physical and societal devastation in Marawi. Our beautiful city of the South was reduced to ruins by civil strife. Death and destruction broke the hearts and backs of its residents. But not their spirit. One year later, Marawi is now under rehabilitation.

These and other experiences like this motivated me to answer the call of public service. I believe, in all humility, that my life is just a snapshot, it is a glorified blow-up of what millions of Filipinos live through on a day to day basis -- the hardships, the challenges, the back-breaking, hope-extinguishing despair. Yet, through the ashes of destruction, the Filipino always manages to rise up and fight another day.

I believe that I was destined to serve as an inspiration for the average Filipino to fight, to rise above adversity, to conquer and defy, and to embrace life and all its difficulties. Manny Pacquiao is the best fairy tale every Filipino could tell and re-tell to all generations yet to come. Manny Pacquiao’s story is incredible but true.

Miracles do happen. Dreams do come true. Being poor does not mean one must die poor. Hard work and persistence will set you free from the shackles of poverty. But it is faith that will take you to the very top.

That is Manny Pacquiao’s story so I ask you -- all of you -- to never lose faith in what you can do as a human being, belief in the loyalty of family, and belief in the Almighty. It is not easy to believe in the power one. But I ask you to look around you. Count the faces. Do the multiplication and suddenly we are a power of 50 or 100 or 1,000.

You, with your education, determination, and faith you can change the world.

Senator Pacquiao, also commonly called as "People's Champ" and "Pambansang Kamao" in the Philippines, received praises and appreciation from his countrymen and fans around the world. Personally, I also felt goosebumps while reading his speech.

Local and global media organizations published articles that gave a positive feedback about him. Will it be his ticket to the presidency? What do you think?