The state weather bureau said that TD Samuel continues to move West Northwestward toward the Samar-Leyte-Dinagat area. Moderate to heavy rains which may trigger flooding and landslides is expected over Visayas, Sorsogon, Masbate, Romblon, Dinagat Islands and Siargao islands, PAGASA said, adding that residents of these areas, especially those living near or in river channels, low-lying and mountainous areas, are advised to take precautionary measures, coordinate with local disaster risk reduction and management offices, and continue monitoring for updates. Fisherfolks and those with small seacrafts have been advised not to venture out over the areas under TCWS #1 and the eastern seaboard of Southern Luzon. Samuel is expected to make landfall over the Samar-Leyte-Dinagat area this evening.

At 10:00 AM today, PAGASA said the eye of the tropical depression was spotted at 335 kilometers East of Maasin City, Southern Leyte packing maximum sustained winds of 55 kilometers per hour near the center and gustiness of up to 65 kph. It is moving West Northwest at 20 kph. 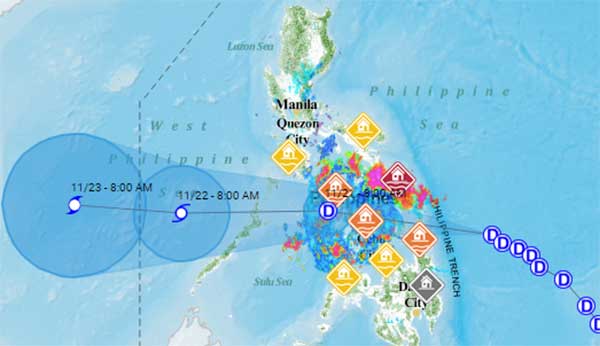 Tropical Cyclone Warning Signal No. 1 (winds of 30-60 kph may be expected in at least 36 hours or intermittent rains may be expected within 36 hours) is up in the following areas:

The impact of the wind and precautionary meausures can be read on this page.

The forecast position of Bagyong Samuel, PAGASA said, are as follows: