By Admin
June 21, 2018Camarines Surjeraldyn rapinannewspaul tirao
The name of Father Paul Tirao, a priest in Camarines Sur, was dragged in the death of Jeraldyn Bulalacao Rapinan of Barangay San Jose, Baao.

Tirao is the alleged father of the 28-year-old victim's baby who is set to be baptised this Saturday, June 23.

According to a report by the Bicol Standard, Rapinan was found dead in a "grassy portion of a roadside along Maharlika Highway at Del Pilar, San Fernando" last Friday, June 15.

Ai-ai, as she was fondly called at home, "was discovered with several stab wounds on her chest, and there were signs that she was strangled. Her hands and feet were bound by a yellow nylon cord, while her face was covered by a malong," the report said.

Vivencia, the mother of the victim, reportedly knew about the relationship between her daughter and the suspect. Ai-ai used to work as a "helper" in the suspect's residence and stayed there for ten years, she said.

Sherilyn, the victim's relative and best friend, reportedly confirmed Ai-ai's relationship with the priest. She also told the news team that her cousin was going to meet the suspect at the Diversion Road in Baao. The priest, as what Sherilyn heard from Ai-ai, promised to give the victim money for the baptism of the child.

She became worried when Ai-ai did not return after an hour, but according to her, a text from the victim's phone informed her that she will not go home that evening.

Sherilyn reportedly got suspicious that something bad happened because it was unusual for Ai-ai to make that sudden decision and the latter did not bring clothes and her baby was left at home. She then lost contact with Ai-ai after the victim's phone went off, the report said.

Although subject for verification, rumors making rounds in the municipality said another woman has an intimate relationship with the priest.

The priest's name and photos of him as well as Rapinan and her child went viral on social media sites after the shocking news broke out. 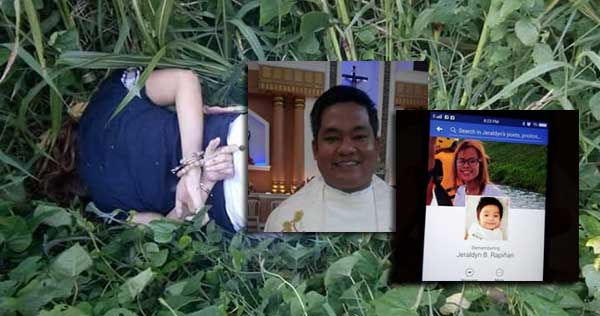 However, a priest named Paulo B. Barandon described the news as fake, saying:

To those who are spreading the fake news that a priest is the person of interest in d killing of a 28 yr old woman in Cam Sur,
To those who have already judged and condemned d priest and d church,
To the agents of fake news and
To the fanatics:
KINDLY READ THIS

In my program this morning over Radyo Veritas Legazpi and Veritas TV, I was able to interview P/Supt Venerando Ramirez of PNP Cam Sur. The PNP official denied earlier reports that a priest is a person of interest in their ongoing investigation of the murder of a 28 yr old woman whose body was found beside the highway in San Fernando Cam Sur. P/Supt Ramirez said that they have not given any name or identification of any person of interest or surpect because they do not want to be accused of any violation of human rights.

During the interview he said that the investigation is ongoing.

UPDATE: The Camarines Sur Police Provincial Office thru P/Supt. Venerando Ramirez denied earlier reports that a priest officially became a person-of-interest in their ongoing investigation of the murder of a 28-yr. old woman whose body was discovered beside the highway in San Fernando Camarines Sur. Col. Ramirez is wondering where the information came from.

Meanwhile. the Archdiocese of Caceres has released their official statement regarding the issue.

The local news outlet said the victim's family "talked to GMA News and made several bold, sensitive and startling revelations." In a reply to a comment, the station revealed that "GMA Manila will air the news first on TV. After that, it will posted online as soon as it is available."