By Admin
February 17, 2018elizardo berbomotorcycletrending topicviralwheeltek
Motorcycle dealer Wheeltek has given a free motorcycle to the man who was shown in viral photos being apprehended by traffic enforcers.

On its Facebook post, the company said it was their "way of giving back to people in need."

The lucky elderly who got a motorcycle free of charge is Elizardo Berbo, a resident of Bukidnon. He became a subject of images that made rounds on social media following an incident in Valencia City where he got caught using a noisy and prohibited muffler.

Netizens felt pity for Berbo when he was asked to smash and destroy his own muffler, a part of the 10-year-old motorcycle that he uses to transport goods for livelihood. 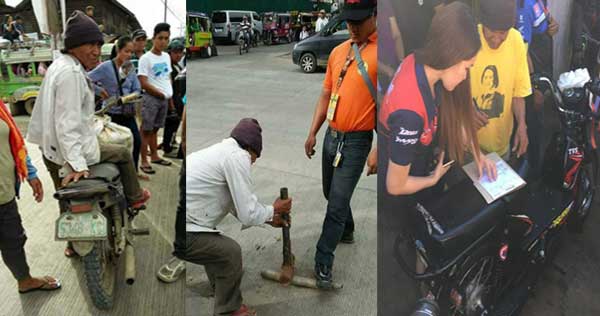 Wheeltek Motor Sales Corporation and TVS Motors Philippines took action and immediately coordinated with the office of City Administrator Genardo Cadigal to locate Berbo and to help in facilitating the delivery of their "gift" for him, a brand new TVS XL100.

"We know tatay Elizardo loves to ride his motorcycle and we won't let a simple incident hinder his passion for riding," the company stated. "This is our way of paying it forward."

"Enjoy your new bike and we know that it will serve you well since TVS bikes are built to last," the FB post reads. "Stay safe and ride safe tatay!!!"