By Admin
January 19, 2018newsscandaltrending topicviral
Scandalous videos of a certain Michaela Caballero Baldos, said to be a student of the University of Santo Tomas (UST), have gone viral.

Netizens reportedly searched for her Facebook page after dozens of videos showing her doing lewd acts were leaked on social media and adult sites. 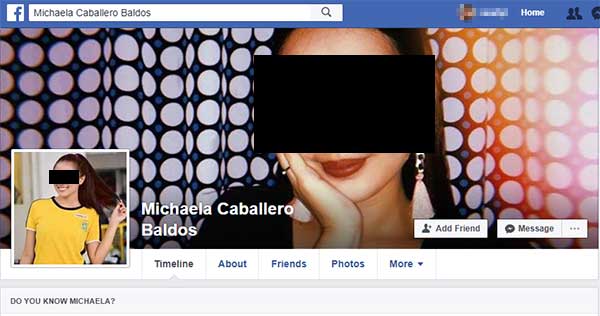 According to several reports, the girl was a hacking victim. The videos, which she allegedly recorded and sent to her boyfriend via Messenger, were made public following the hack.

The other side of the story is that the girl in the videos, some of which were dubbed "finger licking good," is not Michaela but only a lookalike. Her unidentified beau and other individuals were also accused of uploading the materials on websites other than Facebook.

However, unverified information reaching our end revealed that her boyfriend already asked the parents for forgiveness and vowed to avoid what others called their "habit" of sharing inappropriate videos from happening again.

An investigation to identify the culprits and to bring them to justice is said to be underway. Several fake accounts with the victim's name and grabbed photos have been created by unknown individuals since the news broke out, but many have been reported and subsequently deleted as per monitoring.

Michaela Baldos, on the other hand, is reportedly staying in her house with family members as she tries to recover from stress and trauma caused by the purported controversial scandal videos.