By Admin
November 10, 2016newsscandaltrending topicvideoviral
The woman in the Pagadian scandal video that went viral on social media made a public apology, a city resident who personally knows her said.

In a Facebook post on Thursday, November 10, the concerned netizen urged others not to share the video because one of those involved already apologized for what they've done.

The netizen also revealed that people have been asking for a download link and a copy of the video but she refused as she felt pity for the persons in the lewd clip. 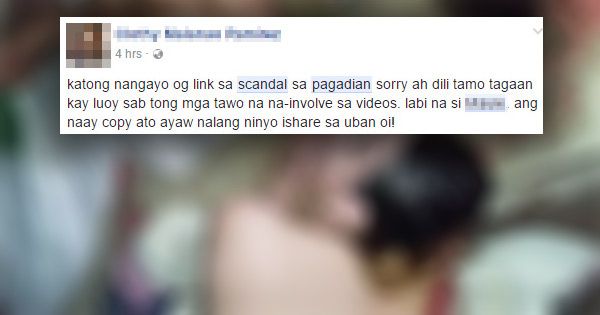 According to sources, the so-called Pagadian scandal video has a short and long version: an 8-second spliced clip and a 27-minute full video.

Viewers disclosed that a woman, a man, and two gay persons were involved. One of the gays, tipsters said, took the video. Their names and identities remain unknown to many except for some locals.

It's been said that Facebook takes down the Pagadian scandal video if not shared privately.