VIRAL: Man makes marriage proposal in the middle of traffic

By Admin
November 04, 2016newsvideoviral
A man connived with enforcers and fellow riders and even secured a permit to make a marriage proposal that stalled traffic in Calamba, Laguna.

In a video that went viral on Facebook, Mikki Villanueva​ is seen talking to a traffic enforcer after his motorcycle got stuck in the middle of the road.

He was issued a ticket for not wearing a helmet and causing disturbance to other motorists. The unsuspiscious girlfriend, Cheann Saltin, who was worried while looking at him talking to the traffic enforcer, was clueless that it was all part of a drama.

According to John Khyan Villanueva, Mikki's nephew who posted the video on All Saints Day, the plan was laid two weeks before Cheann's arrival from Singapore.


Mikki asked for pieces of advice from his co-members at FZOL (FZ Owners Laguna) motorcycle club to come up with a concept.

The group requested a special permit from the office of Mayor Timmy Chipeco to use the intersection for five minutes, which the assistant city administrator approved.

It took Mikki, his fellow riders and the traffic enforcers one week to practice their acting, revealed John, who said that his Tito owes him a lot for the tasks he had given him that day.

As of this morning, the video documenting the one-of-a-kind marriage proposal has garnered more than two million views on several Facebook pages. 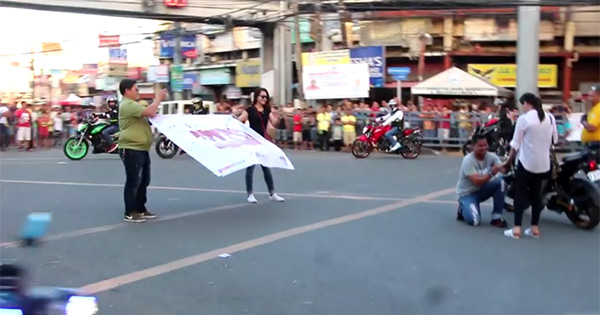