The 21-year-old Filipina-German beauty queen earned flak from netizens after she asked on Facebook live Miss Earth Austria 2016 Kimberly Budinsky if the Nazi leader was from her country.

"Okay, that's a bad question because we normally don't talk about Hitler, but, yeah, he is," Budinsky answered.

"Oh my God! Our President is doing Hitler stuff here in the Philippines," Schweighart said. 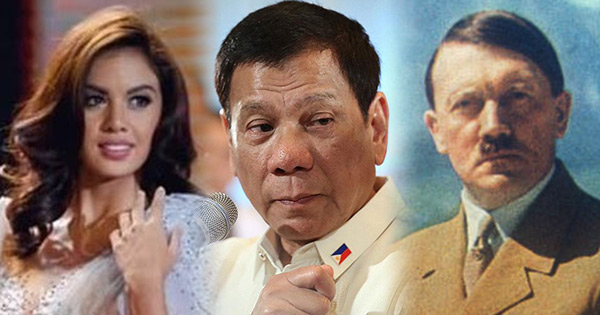 Schweighart deleted the video as negative comments from bashers overflowed on her timeline. However, the Pageant Central Facebook page was able to save a copy and re-uploaded it on FB and other social media sites.

In a separate post following the incident, she clarified her statement and apologized for likening Duterte to Hitler.

"Because all my life I was always teased by fellow Filipinos as 'Hitler' because they are not well-informed that Hitler was not German. In fact, Hitler was Austrian. So when I saw my fellow delegate, I made a soft joke about it out of my excitement," Schweighart explained.

"I am an extremist so forgive me my fellow Filipinos and Duterte supporters if you didn't understand how I am. I got that idea wherein i said, 'Duterte is doing Hitler stuff' from online news, newspapers with headlines saying he is Hitler-like but for the good. I was just not able to explain what i really meant further in Facebook live because my mind was occupied with the other delegates i want to capture on my Facebook Live cover," she added.