By Admin
September 07, 2016newspresident dutertepresident obamaviral
A trip to Hong Kong has been offered to anyone who can prove that Philippine President Rodrigo Duterte cursed US President Barack Obama.

Famous ventriloquist and puppeteer Ruther Urquia, grand finalist of Pilipinas Got Talent Season 1 and a known Duterte supporter, made the offer in a Facebook post:

[I will give anyone who can show solid proof that Duterte actually cursed Obama a trip to Hong Kong. Edited (evidence) is not allowed.] 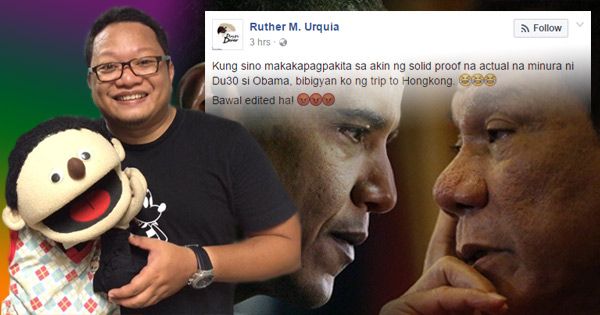 It's unclear if Urquia was serious or just joking considering that he is a stand up comedian.

His post, however, has drawn funny reactions and sarcastic comments.

Another netizen said he will provide the pocket money.

Those who are willing to accept Urquia's challenge, particularly the anti-Duterte forces and presstitutes, can replay the video and review the transcript of the President's remarks on this page.