By Coolbuster
September 01, 2016newspresident dutertevideoviral
"Spot on!" and "Very well said!" are the netizens' words for a supporter who defended President Rodrigo Duterte from biased media and critics.

Paggabao's comment on AJ+'s post titled "Why is the U.S. helping fund the Philippines' deadly war on drugs?" reads:

"Let me give you a grasp of the Philippines' situation today:

1st off: 91% of filipinos support our President. He is the last incorruptible politician here in the Philippines that's why he won. You wouldn't know because you foreigners don't know this man. He won under the promise of cleaning the country of drugs and corruption.

2nd: the VP and some Senators won last election under the banner of the previous administration. They used the gov't, drug money and foreign aid for typhoon haiyan as campaign funds.

3rd: they are trying to discredit our President so that he can be succeeded by the VP so they can continue their corruption. They are buying our corrupt media to relay it internationally to give him a bad reputation.

4th: the oligarchic corporations, both local and foreign, that own mainstream media have vested interests in mining our natural resources, which they continued unhampered during the previous administration, are being hit economically due to our president's hard stance on mining. Some are even on the drug syndicates' payroll.

5th: the EJK issue is not being reported correctly. The corrupt media says 2,000+ have died because of the war but the reality is that only 700+ are killed in the operations. The rest are either the gangs and corrupt officials killing their subordinates to prevent rats. Other deaths are not even drug related. What is funny is that the senator leading the EJK investigation is part of the drug trade.

6th: why do we know this? Because the people are the ones living in the streets. They know who are the addicts and peddlers in their areas. The government just needs to consolidate these information and run the revalidation on the 678,000 (and counting) drug surrenderees. The people in the list will be asked to surrender and change their ways. If they instead chose to fight it out, definitely they will be killed because the police has to protect themselves.

Conclusion: cut the crap! The one BBC aired is a fake assassin, the one in the NYTimes newspaper was killed by the peddlers and not by the police, and the woman interviewed by the 60-minutes Australia is in cohorts with the corrupt politicians. We have a no-nonsense leader so please look at the reality and not fabricated news!"

As of 1 p.m. today, Paggabao's comment was 'liked' over 2,500 times. However, a certain Isaac John "corrected" the points he raised, saying:

"1. No, there was an opinion poll with a sample size of 1,200 that showed 91% of the respondents were favorable with the new President. This small sample size is not enough to conclude that majority of Filipinos support Duterte. A better dataset to use is the election returns, because that has a much bigger sample size. 16.6M of voters were in favor of Duterte. The other 25M voters were not. Duterte is a "minority" president.

2. This is a baseless accusation. Foreign aid for Typhoon Haiyan victims have been audited, and re-audited by the COA. The full report is available to the public: http://www.coa.gov.ph/.../userupload/DRRM/Yolanda_Report.pdf

3. No one is trying to discredit your beloved Duterte. He is already doing a fantastic job, doing that to himself.

4. Duterte is an oligarch too. http://www.edgedavao.net/index.php?option=com_content.... The mining companies that were issued a hold order, are only those who didn't support Duterte in his election campaign.

5. Again, you have no evidence that Senator De Lima has any connections to the drug trade. The only reason Duterte started these rumors (on camera, mind you) is because she is part of the ever-decreasing minority opposition that dares to criticize him. The killings are being reported correctly. Furthermore, it is corroborated by independent reports of international watchdog organizations like HRW, Amnesty International, and the UNHRC.

6. The PNP's Oplan Tokhang is a war against the poor. It is oppressive and should be stopped immediately. Here are eyewitness accounts of how this oppressive operation is being done:

These are not posts of random netizens, mind you. These are eyewitness accounts of real-life lawyers, trying to save people from the madness that is Duterte's drug war.

Duterte may have succeeded in silencing the opposition here in the Philippines. But thanks to IT, the world is smaller. The international community has direct access to events taking place here. Duterte and his band of social media aggregators, cannot fool everyone." 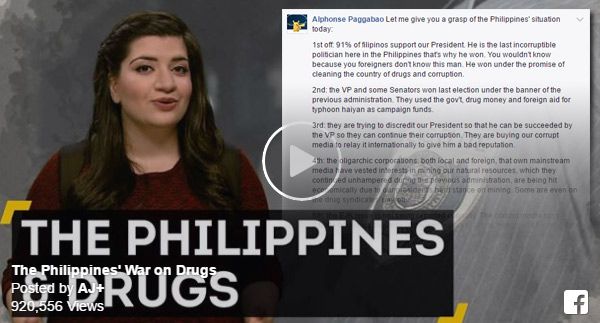