By Admin
September 06, 2016newspresident dutertepresident obama
After mixed reactions from various sectors, the truth has come out: The cancellation of the Obama-Duterte meeting was mutually agreed upon. 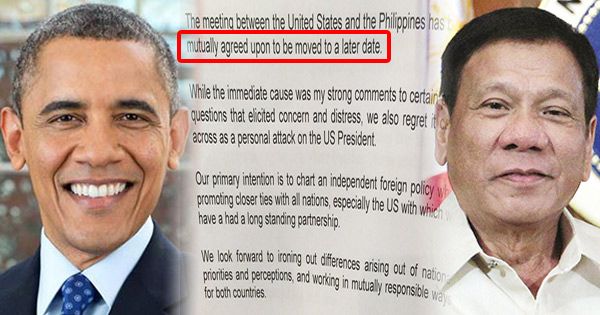 The meeting between US President Barack Obama with Philippine President Rodrigo Duterte in Laos this week was cancelled.

The announcement came after Duterte lashed out at Obama for allegedly raising the issue on human rights amid the Filipino leader's war against illegal drugs.

It was found out that Obama's name was only mentioned by Duterte after a member of the audience during a press conference mentioned the US President's name.

What Duterte actually said during the presscon were:

Reporter: "Sir, there have been concerns on extrajudicial killings, Sir... and you will meet leaders, any line of communication that we have prepared to address this issue in front of other foreign leaders?"

Duterte: "To whom shall I address myself to? Who will be asking the question? May I know?"

A member of the audience: "Obama, Sir."

Duterte: "You know, the Philippines is not a vassal state. We have long ceased to be a colony of the United States. Alam mo marami dyan mga kolumnista who look up on Obama and the United States as if we are the lapdogs of [that] country."

Note that Duterte was addressing the audience and not Obama, whose name was only dragged because someone from the audience mentioned the US President.

Duterte: "I do not respond to anybody but the people of the Republic of the Philippines. Wala akong pakialam sa kanya [Obama]. Who is he? I am not beholden to anybody. I am a President of a sovereign state and we have long ceased to be a colony. I do not have any master except the Filipino people."

The President then told the reporter: "You must be respectful. Do not just throw away questions and statements. Putang ina (son of a bitch), I will curse you in that forum."

Local and international media claimed that Duterte was addressing Obama and Duterte's critics were quick to give their statements regarding the issue.

"President Duterte's vulgar language directed against President Obama is wrong on so many levels and will definitely have detrimental effects on our diplomatic relationship and alliance with the US. You don’t just slap the face of the most powerful country in the world and expect to get away with it. It was uncalled for and now our country’s security sector would be weakened because of it."

"Whatever the brand of foreign policy the President has in mind, it must always be conducted with respect and diplomacy. I am afraid his recent statements against President Obama will have consequences on our bilateral relations, whether immediately or in the near future. I think it is clear to the US that President Duterte's uncalled for tirade against President Obama is a personal sentiment of our President, characteristic of his colorful personality, and does not reflect that of the Filipino people as a whole."

"Talk about starting off on the wrong foot. The scheduled meeting between President Rodrigo Duterte and US President Barack Obama would have been an opportunity for the two heads of states to know each other on a personal level. It is unfortunate that such meeting did not push through because of unnecessary rhetoric over human rights issues. We must remember that our foreign policy is shaped in accordance with our national interest. Unfriendly rhetoric and undiplomatic statements will not bring us anywhere."

The three lawmakers among many other anti-Duterte forces did not know that the cancellation of the Obama-Duterte meeting was mutually agreed upon.

In an official statement, the Palace said the meeting was moved to a later date.