By Admin
September 15, 2016movienewsshowbiztrending topic
A photo of the first on-screen kissing scene of Kathryn Bernardo and Daniel Padilla (KathNiel) in the movie "Barcelona" has been leaked online.

The image was actually a screenshot from a video allegedly taken inside the cinema.

The video of KathNiel's first-ever kiss on the lips was removed by YouTube due to a copyright claim by ABS-CBN, the parent company of Star Cinema. However, a screenshot of the controversial kiss circulated online after being shared by Facebook and Twitter users.

KathNiel's much-awaited kissing scene that finally happened in "Barcelona" was already anticipated by fans following the tandem's admission during their grand media event.

"Barcelona: A Love Untold" has been dubbed as the loveteam's most mature project ever since their kissing scene only became part of teasers for their movies and teleseryes in the past and never pushed through. The reason, according to the grapevine, was Kathryn's affiliation back then with the Iglesia Ni Cristo.

Kathryn, industry observers said, can portray more mature roles now that she apparently got expelled from the religious group.

Reports said her endorsement of the candidacy of former interior secretary Mar Roxas for the presidency, her alleged wearing of a Santa Claus costume as well as a necklace with a crucifix pendant, and her lips-to-lips kiss with Daniel in the movie served as proof. 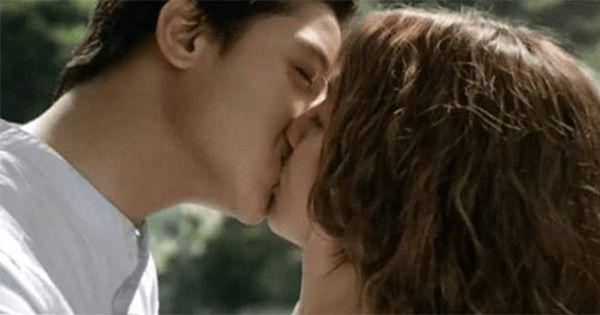