Duterte did not give go signal for Veloso execution — witness

By Admin
September 13, 2016newspresident duterte
The media did not tell you this: A witness said President Rodrigo Duterte did not give the go signal for Mary Jane Veloso's execution.

According to agriculture secretary Manny Piñol, he was present at the meeting between the Filipino leader and Indonesian President Joko Widodo. In fact, the cabinet member has an evidence to support his claim. 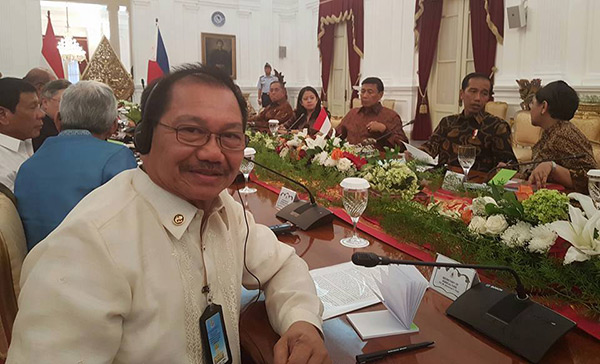 Is this another case of "lost in translation?"

This was followed by another interview by DZMM anchor Anthony "Ka Tunying" Taberna who also asked me the same question.

Well, here is my answer: No, I never heard President Duterte say that he was giving the Indonesian Government the "Go" signal to execute Veloso.
Why am I so sure?

Well, I was present during the bilateral talks between the Indonesian Government and the Philippine Government at the Istana Merdeka President Palace.

I was also present during the delivery of official statements by the two Presidents after the bilateral talks and I also joined the party during the State Dinner tendered by President Widodo for President Duterte and his Party.

Maybe it was out of habit that as a former newsman, I took notes of the exchange of statements between the two Presidents during the bilateral talks.

It was President Widodo who made the opening statement and President Duterte responded by reading a prepared statement.

I could not quote President Duterte verbatim but I am sure that the transcript of his statement would prove that what he said during the official statement was the following:

"We respect your laws. We will not interfere with your judicial processes but we are asking for clemency."

That statement referred not only to the case of Veloso but also for the 105 Filipino fishermen who are now detained in different jails all over Indonesia for alleged illegal fishing activities.

So is this another case of "lost in translation?"

Only the Indonesian side could explain that.

As far as I am concerned and as a former journalist myself, I can state with certainty that during the official bilateral talks between the two leaders, President Duterte never said he was giving a "Go" signal for the execution of Veloso.

In fact, he did not even mention her name and only referred to her as a Filipino whose fate under Indonesian laws he would respect.

Piñol made his side of the story public after The Jakarta Post reported that Duterte has given Widodo the green light to proceed with the convicted drug mule's execution.

"President Duterte has not given green light for Mary Jane's execution,” he said in a statement released Monday.

According to him, the President told his Indonesian counterpart that "he respects their judicial processes and will accept whatever the final decision they will arrive at regarding the case."

Yasay added that both the Philippine and Indonesian governments felt no urgency to take action because Veloso, who was sentenced to death in 2010 on charges of drug smuggling after she was caught with 2.6 kilograms of heroin at the Indonesian airport, would be testifying in a case against her alleged illegal recruiter.