Did Duterte curse Obama? Here's the transcript (full text) of what he really said

By Admin
September 06, 2016full textnewspresident dutertepresident obamatranscript
Did President Duterte curse US President Barack Obama? Here is the transcript (full text) of what he really said during the presscon.

PRES. DUTERTE: You know, the Philippines is not a vassal state. We have long ceased to be a colony of the United States. Alam mo, marami diyan, sa mga kolumnista, they look upon Obama and the United States as if we are the lap dogs of this country. I do not respond to anybody but to the people of the Republic of the Philippines. Wala akong pakialam sa kaniya. Who is he? When as a matter of a fact, at the turn of the century, before the Americans left the Philippines in the pacification campaign of the Moro in this island, there were about six million ang population ng Moro. How many died? Six hundred. If he can answer that question and give the apology, I will answer him.

I am not beholden to anybody. Iyong mga kolumnista diyan na ‘wait until he meets,’ who is he? I am a President of a sovereign state, and we have long ceased to be a colony. I do not have any master, except the Filipino people, nobody but nobody.

You must be respectful. Do not just throw questions and statements. Putang-ina, mumurahin kita diyan sa forum na ‘yan. Huwag mo akong ganunin. Tell that to everybody. Itong mga kolumnista, para ba akong tinatakot, anak ka ng -- umalis kayo diyan sa Pilipinas, pumunta kayo doon sa Amerika. You write kung ano nasa isip -- the lap dogs of this American. Who is he to confront me? As a matter of fact, he has too many --America has one too many to answer for the misdeeds in this country. Hanggang ngayon hindi pa tayo nakatikim ng apology niyan. That is the reason why Mindanao continues to boil.

Sabi mo that was the last century, ‘yang wounds na ‘yan from generation to generation. As a matter of fact, we inherited this problem from the United States. Why? Because they invaded this country and made us their subjugated people. Everybody has a terrible record of extrajudicial killings. Why make an issue about fighting crime? Hindi nga niya maubus-ubos ‘yan sa Mexico border niya. Look at the human rights of America along that line, the way how they treat the migrants there. Masyado kayong bilib sa Amerika, bumilib kayo dito sa atin, ano iyang America. Siya ang mag-explain sa akin kung bakit ganun extrajudicial killing nila. Can he explain the 600,000 Moro massacred in this island? Do you want to see the pictures? Maybe, you’ll ask him, and make it public. We have a recorded history of that sordid period of our national life.
Nobody but nobody can just—sino ka? ‘Yung mga American-Indian sa sine lang inubos mo eh. What about the rights of those guys who died in the past? Is it because it’s just the past tense we do not answer for the present tense? You must be kidding. Stop joking yourself. Kayong mga sobra kabilib diyan—who is Obama to ask me that? I’ll tell him, who are you? Tell him that, telegraph mo ngayon. Hindi ako punta dito, magpaka-ulila diyan sa mga…

We have long been a Republic. I do not -- I said, I do not kneel down before anybody else, except the Filipino in Quiapo walking in misery and in extreme poverty and hunger. Hindi kayo maghinto diyan sa droga—the campaign against drugs will continue. Maraming mamatay diyan, plenty will be killed until the last pusher is out of the streets. Until the drug manufacturer is killed, we will continue and I will continue, and I don’t give a shit about anybody observing my behavior. Sige lang mabilib kayo diyan. ‘Yung mga column nag-bash, susmaryosep! Pagka-lap dog ng mga--pretending to be the conscience of this--sino ka? Hindi ako bilib diyan sa America. Gusto mo sipain ko pa ‘yan sa harap mo eh. Pumunta kayo doon. 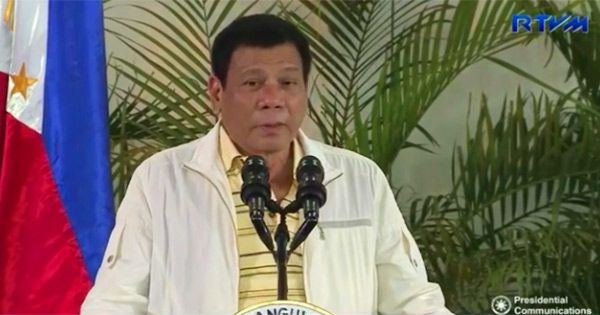