The former justice secretary appeared angry and irritated as she gathered her documents and personal belongings before going out of the plenary hall.

In an ambush interview, De Lima said "I cannot stand it" adding that she plans to deliver her own privilege speech on Tuesday.

When Cayetano was done, Sen. Manny Pacquiao moved to declare the chairmanship and membership of the Senate Committee on Justice and Human Rights, which De Lima chairs, vacant.

As the motion was pending, Sen. Frank Drilon, De Lima's co-Liberal Party member, pointed out that the chairmanship cannot be declared vacant.

Another senator asked that the session be suspended.

Watch the video of the walkout, courtesy of ABS-CBN News: 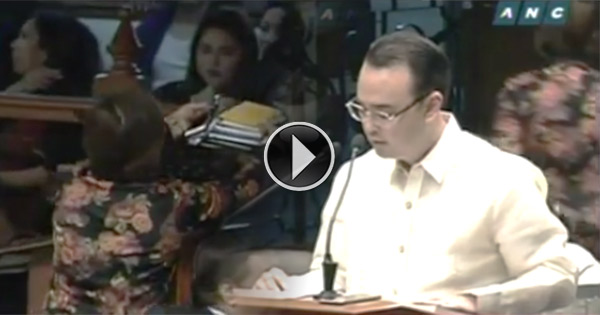