By Admin
September 26, 2016newspresident dutertesenator leila de limavideo
Senator Leila De Lima on Monday asked President Rodrigo Duterte about why he is "so obsessed" with her: "May gusto po ba kayo sa akin?"

As her reaction to Duterte's strong words during an event in Malacañang, the lawmaker in an interview said the chief executive should stop "harrasing" her.

At the Palace, Duterte assured the public that De Lima will be jailed for her involvement in the illegal drug trade at the New Bilibid Prison in Muntinlupa during her stint as justice secretary.

The President also announced that the senator has a sex video. He even asked about whether De Lima's partner doing the intimate act was "the guy in the kubol" or "the one driving you?"

In a separate statement sent to journalists, De Lima said, "The President's foul mouth has again desecrated the hollowed grounds of Malacañang with another round of his vile personal attacks against me. I cannot resist asking the President, what do you see in me that you find so sexual? Why is your mind so fixated on my sexual aspect? You are so obsessed with me. Why???"

In a speech, the President denied wanting De Lima saying he lost his appetite when he saw her video. 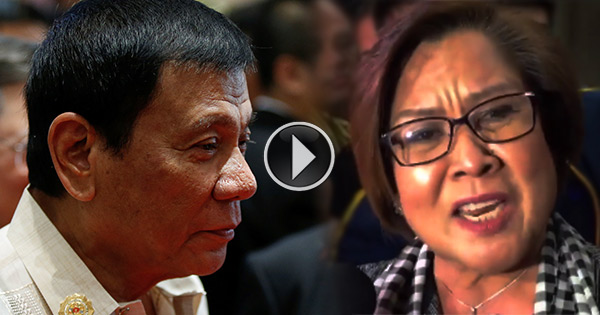