Cute girl's message to Duterte: 'Don't give up on being a President' [+video]

By Admin
September 07, 2016president dutertevideoviral
A cute Filipino-American girl makes an appeal to President Rodrigo Duterte in a video: "Don't give up or the bad guys will take your spot."

Facebook user Genesa C. Mase, a staunch Duterte supporter, took a video of her daughter who gave a touching message to the Filipino leader.

The adorable girl, named Buging by her mom, said:

"Tatay Digong, don't give up on being a President.

If you give up and don't protect the world then everybody in the country will be killed.

Don't forget to never forget to not give up [on being] a President...or the bad guys would want to be the president. They'll take your spot."

In her Facebook post, which turned inaccessible after the video got reposted by several Facebook pages and went viral, Mase clarified that she did not teach her daughter what to say.

The cute girl earned praises from netizens on social media for expressing her own views regarding Duterte at a very young age. 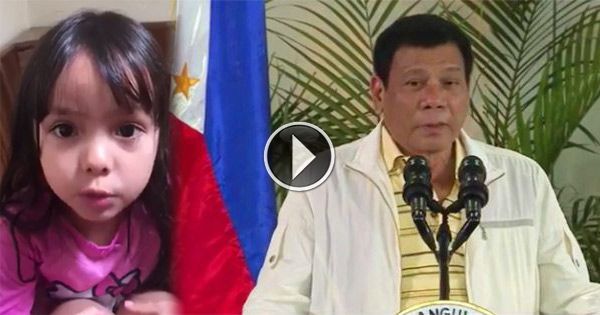