By Admin
August 28, 2016newssenator leila de lima
Two relatives of Senator Leila De Lima have been arrested after they were caught by police sniffing shabu in Camarines Sur earlier this week.

Based on the police report, it was around 6 p.m. Tuesday while cops from Baao Municipal Police Station (MPS) were conducting Oplan TokHang (toktok hangyo or knock and plead) in Barangay San Juan when a concerned citizen tipped them off that a drug session was happening inside one of the houses in the area.

The police officers immediately went to the house pointed by the tipster and caught the suspects in the act of using shabu. Two sachets of suspected shabu and drug paraphernalia were recovered from their possession.

A local public official from Iriga City has confirmed that Alexander and Richard are relatives of De Lima. Barangay Kagawad Elma Gaspi told media that the two suspects are sons of the Senator's cousin.

According to Gaspi, the Colarina brothers were previously arrested by National Bureau of Investigation (NBI) operatives for their involvement in illegal drugs. It was not disclosed why they were released from jail.

Senator De Lima, chairman of the Senate committee on human rights, leads a Senate inquiry on extra-judicial killings allegedly in connection with the Duterte administration's war against illegal drugs. 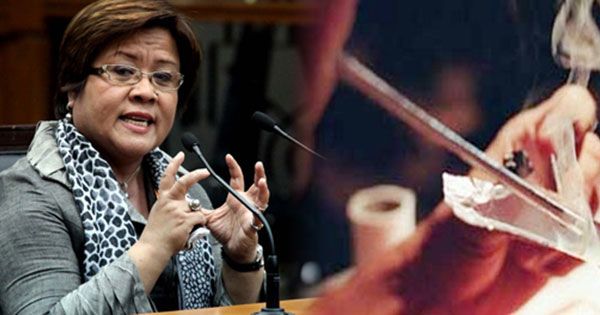