Did Jessy Mendiola use camera angles to look sexy in photos?

By Admin
August 03, 2016memenewsphotoshowbizviral
Did Jessy Mendiola use camera angles to look sexy in her photos that went viral before she was declared FHM's 'Sexiest Woman' in 2016?

Some netizens have been asking this question when a meme comparing two photos of Jessy in a two-piece bikini — one shows the actress posing with the camera in a slightly high angle and another one with the lens at waistline — circulated on Facebook. 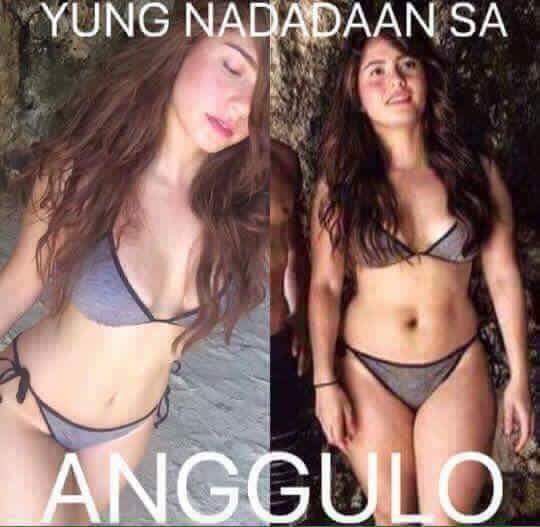 In photography, taking pictures at different angles can affect the look and shape of a person's body. As is shown, the 23-year-old Kapamilya star looks sexier in the first photo. Her body and legs appear slightly bigger in the second photo.

Well of course there's some kind of "bias" as far as the meme is concerned as it was published on social media by a fan page that favors actress Angel Locsin, the ex-girlfriend of Luis Manzano who has been romantically linked to Jessy recently.

Since Jessy and Luis started dating, the two most especially Jessy, earned flak over reports that this has been going on even before when Angel was still in the picture.

Wurtzbach, as classy as she always has been, said in her twitter account to defend Jessy against bashers: "What I saw was a girl who was just really ecstatic to be given that recognition," Wurtzbach wrote. "Nothing wrong with that. Congratulations, Jessy!"

With Jessy's case, the phrase "it's lonely at the top," might actually ring true when her recognition comes with a bit of bashing.

While bashers continue to express their hatred towards her, Jessy chooses to ignore the hate and issued a statement instead saying "I'm not the only one who is being hated. But hell, I'm the sexiest woman right and I'm just really happy. So I'll just leave it at that."