The State of the Nation Address or SONA is delivered by the President of the Philippines every year. In it, the Chief Executive reports on the state of the country, unveils the government’s agenda for the coming year, and may also propose to Congress certain legislative measures. The SONA is a constitutional obligation, required by Article VII, Section 23 of the 1987 Constitution:

“[T]he President shall address the Congress at the opening of its regular session.”

Moreover, Article VI, Section 15 prescribes that the Congress “shall convene once every year on the fourth Monday of July for its regular session.”

The President of the Philippines appears before Congress upon its invitation, for which purpose a joint session is held in the Session Hall of the House of Representatives. Congress issues tickets, and all preparations are undertaken with Congress as the official host.

On Monday morning, both the House of Representatives and the Senate hold their respective sessions in their respective chambers and elect their officials. Thereafter, a concurrent resolution is filed stating that both chambers are ready to hear the address of the President. Sessions of both Houses are suspended.

A Welcoming Committee, appointed by and among peers in both Chambers of Congress, accompany the President into the Session Hall. Upon his entry to the Session Hall, the Speaker of the House announces the arrival of the President, who takes his position between the Senate President and the Speaker of the House. The Joint Session of Congress is thereafter called to order, followed by the singing of the national anthem and the invocation. After which, the President descends to the rostrum to deliver the SONA.

After the message of the President, the Speaker of the House and the President of the Senate close the Joint Session of Congress for their respective Chambers.

Duterte's SONA 2016 is expected to be "historic and patriotic." The president will present his achievements so far, including the status of his administration's fight against illegal drugs, and plans for the country as its 16th president.

It is also anticipated that he will make a controversial and explosive revelation or announcement.

The address of President Duterte will be the 78th since 1935 and the 30th since the restoration of democratic rule under the Fifth Republic in 1987.

Watch the 2016 SONA live from the Batasang Pambansa, House of Representatives, Quezon City at 4 p.m. Monday. The video replay will be embedded later. 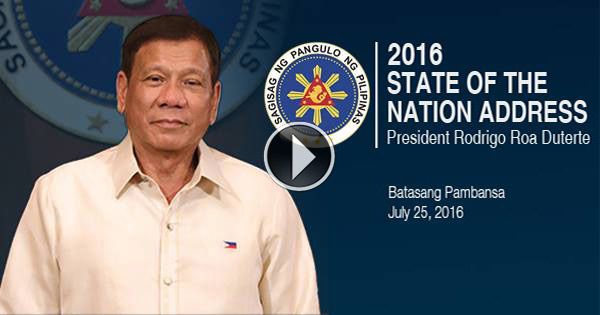