By Admin
July 18, 2016marriage proposalvideoviralWedding
Looking for a simple yet romantic way to propose? This video gives men an idea on how to pop the big question up with a big surprise.

The guy in the video, John, connived with his friends and entire clan to set up a big surprise for his girlfriend, Xas.

During what appears to be a family party on a parking area, the hosts acted like they are holding a guessing game in which a participant is blindfolded.

The girlfriend had no clue that the thing she's trying to figure out is an engagement ring.

She was given several chances to guess it right but to no avail. When it was time to reveal, the boyfriend knelt down and prepared to offer the ring to the woman he loves.

Aften the blindfold was taken off, Xas was tongue-tied and teary-eyed it took her long to answer the question "Will you marry me?" with a "Yes" and a couple of nods. Sweet!

It's great to see friends and family members giving you their all-out support during one of the most memorable times in your life, isn't it?

Do you have or have you witnessed a similar experience? 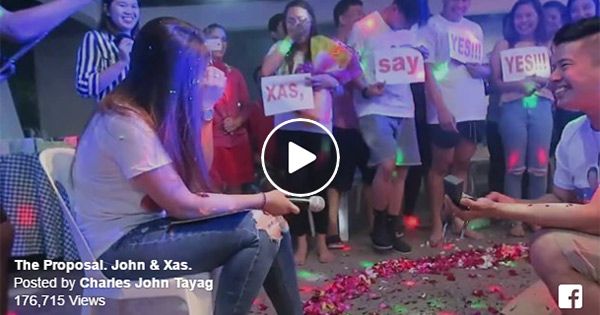