By Admin
July 04, 2016newsviral
Raffy Tima blamed the presidential convoy for causing heavy traffic in EDSA. Is he holding a grudge against President Rodrigo Duterte?

Netizens have been asking this question since July 1st after Tima criticized Duterte's convoy in a Facebook post.

"EDSA Northbound at 9:35AM. Change has come? Not really. Traffic got held up for the presidential convoy from Ortigas en route to Camp Crame," said Tima, who slammed the President in early June for catcalling his wife, reporter Mariz Umali, during a press conference.

The post got violent reactions from Duterte supporters who said Tima should not blame the President for the traffic problem in EDSA but the "lack of discipline" among many motorists.

One of them even published an open letter for the Kapuso news personality, through the Mocha Uson blog, which reads:

Yes, we get it. You are still angry because of the “catcalling” issue but is it really necessary to do this? PNoy said no to wang-wang but there was no serious threat to his life. Even his haters do not want to kill him.

But this time, our President is fighting a war that has all the means to fight back and kill him. He knows the threat to his life and he knows that some of the people presently kissing his ass are the very one out to destroy him. He knows very well that his enemies will go to the extent of destroying even his avid supporters to discredit him and everything he stands for.

So cut him some slack and leave the Filipino in peace not to worry about the safety of our President because a journalist is complaining about traffic in EDSA as if it was a rare occurrence. In fact, our President did not claim to fix the EDSA traffic in his term. He knows it is impossible. So quit on the nitpicking and just understand that we want our President alive to make good his promise.

Because in reality, I am used to the traffic in EDSA. That is why I avoid it. But I would rather worry about traffic than worry whether I am going to be alive if ever I traverse that road.

We ask but a little understanding.

Tima has yet to respond to the open letter. 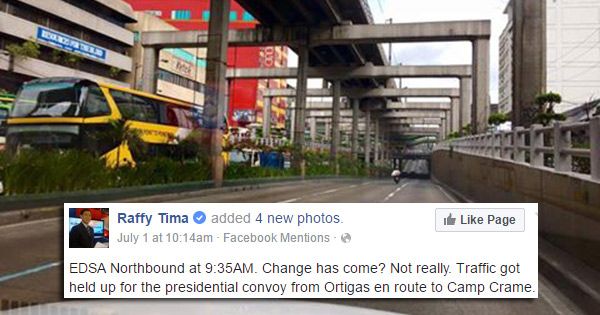 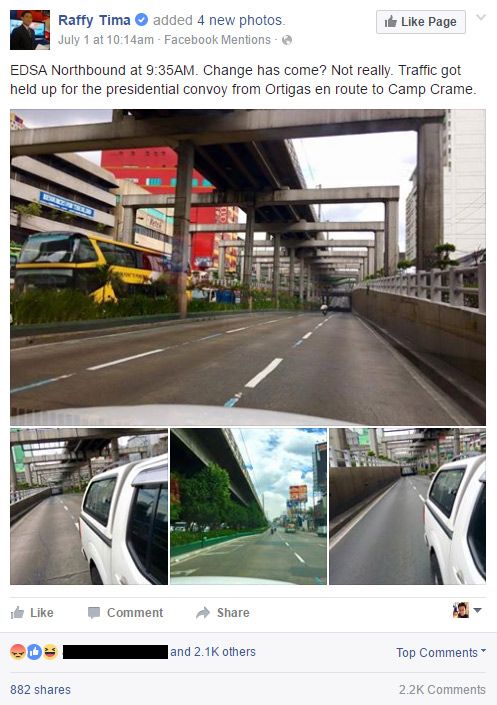