By Admin
July 03, 2016newsvideo
A formation of what was called a huge tornado in Tacloban was captured on video. Some called it waterspout, others said it was a supercell.

Facebook user Yna Chavez Cuayzon took the video while at the airport. In her caption, she said the formation happened at around 3:20 p.m. on Saturday, July 2.

The uploader said she was worried for her kids since she was too far from them, but was thankful that the formation dissipated into the sky and did not cause harm, otherwise the city would have suffered another devastation more than two years after Super Typhoon Yolanda. 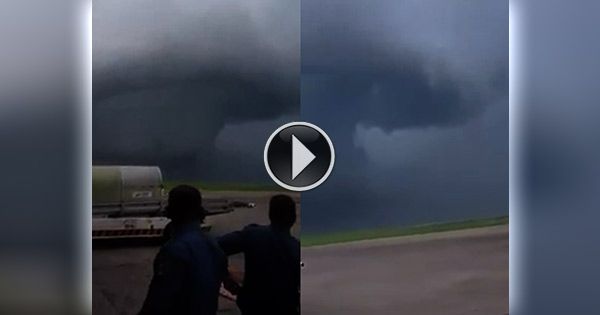 Yna described it as a huge tornado but some netizens disagreed. Here's the difference between the three natural phenomena.

A tornado is "a violently rotating column of air that is in contact with both the surface of the earth and a cumulonimbus cloud or, in rare cases, the base of a cumulus cloud. They are often referred to as twisters or cyclones, although the word cyclone is used in meteorology to name any closed low pressure circulation. Tornadoes come in many shapes and sizes, but they are typically in the form of a visible condensation funnel, whose narrow end touches the earth and is often encircled by a cloud of debris and dust."

A waterspout is "an intense columnar vortex (usually appearing as a funnel-shaped cloud) that occurs over a body of water. They are connected to a towering cumuliform cloud or a cumulonimbus cloud. In the common form, it is a non-supercell tornado over water. While it is often weaker than most of its land counterparts, stronger versions spawned by mesocyclones do occur. Most waterspouts do not suck up water; they are small and weak rotating columns of air over water."

A supercell is "a thunderstorm that is characterized by the presence of a mesocyclone: a deep, persistently rotating updraft. For this reason, these storms are sometimes referred to as rotating thunderstorms. Of the four classifications of thunderstorms (supercell, squall line, multi-cell, and single-cell), supercells are the overall least common and have the potential to be the most severe. Supercells are often isolated from other thunderstorms, and can dominate the local weather up to 32 kilometres (20 mi) away."

Whatever it was, the so-called huge tornado in Tacloban caused fear among the residents particularly those who were affected and traumatized by the previous disaster.

Was it an effect of climate change? What do you think?