By Admin
June 30, 2016livenewsvideo
Watch the live stream of the inauguration of Rodrigo Roa Duterte as he takes oath as the 16th President of the Republic of the Philippines.

The program is set to begin before 10:30 a.m. and end sometime before 4 p.m. Duterte is expected to deliver a 15-minute speech that is free of curses.

The President will wear a barong Tagalog made from piña jusi fabric — created by Davao-based fashion house Chardin and designed by Boni Adaza — to be paired with black pure cotton pants, during the inaugural rites.

His barong’s color is ecru (the light beige color of unbleached linen) with light brown and beige details to highlight its embroidery, which will depict a pattern iconic of Mindanao's minority, the Manobo tribe.

Adaza said Duterte wanted to incorporate a symbol to represent the 11 minorities in Mindanao and they chose the tribal prints of the Manobo as it is the least complicated.

As for the food, Malacañang-accredited concessionaire Via Mare will prepare a reception that reflects the simplicity of the incoming administration yet still boasts of the rich Filipino culinary heritage.

For drinks, guests will have a choice between homegrown delights pine-mango cooler and dalandan juice. 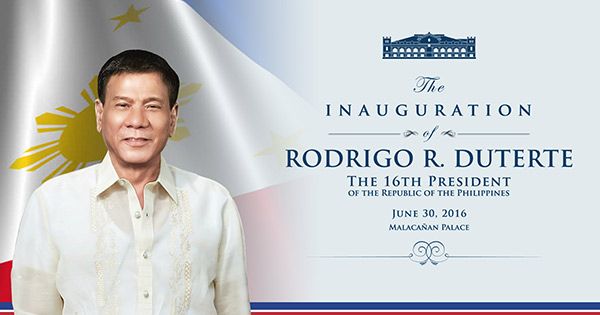