By Admin
June 07, 2016tech newstrending topic
Globe Telecom has activated on Monday its first cell site for the 700MHz band which registered mobile internet speeds of up to 100Mbps.

The attached photo collage includes pictures of company officials posing with officials of the National Telecommunications Commission (NTC) and the fully operational 700MHz cell site, as well as screenshots of the speed test results of 100.32Mbps for download and 33.14 Mbps for upload. 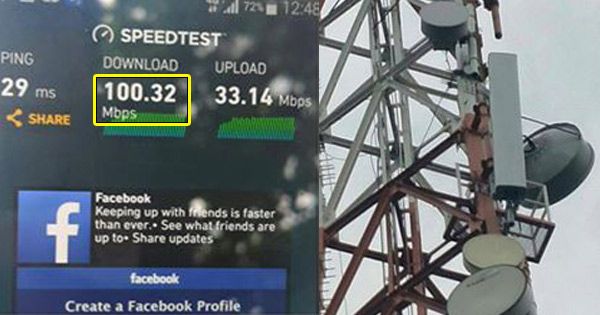 "More areas will soon experience the benefits of 700MHz as Globe starts to roll out the new spectrum," the post reads.

Last week, the National Telecommunications Commission (NTC) has given Globe the permission to use the radio frequencies 703 to 720.5 and 758 to 775.5 MHz purchased from San Miguel Corp. (SMC).

According to Roy Espiritu, spokesman for Information and Communication Technology office of the Department of Science and Technology, the 700MHz frequency allows networks to reach rural areas and penetrate through walls, which means a mobile user staying in the basement will have the same signal strength as those staying on upper floors.

In that sense, the frequency does help improve internet speed, Espiritu said during an interview with ABS-CBN News. However in areas where signal is already strong, subscribers may not feel any significant increase in internet speed unless telcos do something to ease congestion and peering, he added.

Many believe that Globe is just trying to impress incoming President Rodrigo Duterte who warned telcos to improve their services otherwise he will allow foreign players into the market.

Talk about papogi move. The 700MHz band has nothing to do with raw speeds, rather more about signal propagation and penetration. Globe is purposely implying here that the acquisition of this asset will increase their service speed, giving excuse for their currently poor services and justifies the anti-competitive asset purchase, when in fact their system should already be capable of delivering 1Gbps. That's what 4G/LTE standard is for.

Philippine internet is excruciatingly slow because these telecom cartels squeeze in too many customers against their capacity so the bandwidth has to be split up between too many – resulting to more profit but disastrously slow internet for everyone. Congestion! And then there's the peering issue – which is what PLDT should be crucified for. The lack of access to 700Mhz band isnt the culprit for the country's dismal internet speed – its greed.

Internet data caps are monthly limits on the amount of data you can use over your Internet connection, according to publicknowledge.org.

"When an Internet user hits that limit, different network operators engage in different actions, including slowing down data speeds, charging overage fees, and even disconnecting a subscriber," the website explained.

Currently, Globe implements a Fair Use Policy designed to reduce the speeds of users who are responsible for generating large volumes of traffic which greatly impacts the service offered to other subscribers.

"Those who are most likely to be affected by the Fair Use Policy are those who use peer-to-peer applications to download large files, use their mobile phone as a personal hotspot, or stream videos heavily on a daily basis," the telco stated on the FAQ page. "These activities use up a huge portion of network bandwidth, affecting customers like you."

Globe assured subscribers that neither lines are cut nor mobile internet service is stopped when they are affected by the FUP.

"If a customer reaches the 1GB/day or 3GB/month threshold (Postpaid customers) or 800MB/day threshold (Prepaid customers), the internet speed will just slow down to make sure that others can also enjoy our shared resource," the company said.

For several months since I called to complain (reference number 1144970), Globe did not take action to increase my internet speed from the average 2 Mbps, which is only 40% of what I am supposed to get.

Because of this, I am in favor of Duterte allowing foreign internet service providers to enter the Philippine market to break the so-called telco duopoly.