By Coolbuster
June 21, 2016news
Gina Lopez, chairperson of the ABS-CBN Foundation, has accepted the offer of President-elect Rodrigo Duterte to become DENR Secretary.

She will lead the Department of Environment and Natural Resources starting July 1st, a day after Duterte takes oath as the 16th President of the Republic of the Philippines.

Lopez was offered the position during a courtesy call at the Presidential Guest House in DPWH Panacan Depot, Davao City on June 20.

"I am honored with the trust given, this proposal, and I will seriously, seriously consider it," she said in a video released by RTV Malacañang, the official presidential videographer, on Monday night.

She accepted the offer the following day, June 21, after a brief call with the incoming head-of-state.

The ABS-CBN executive, who is known for her environmental and anti-mining advocacies, endorsed Duterte during the campaign period when she was invited as speaker in a summit for clean air and climate change last April.

The DENR post is considered by Duterte as one of the most important in his Cabinet, as he vows to end destructive mining in the country.

Earlier, the incoming President promised to give the position to a recommendee of the Leftist movement but changed his mind due to some sensitive mining issues.


"We, the ABS-CBN Lingkod Kapamilya Foundation, Inc., fully support our Chairman Regina "Gina" Paz Lopez in her decision to accept the position as the Secretary of the Department of Environment and Natural Resources offered by President-elect Rodrigo Duterte.

Gina Lopez's laudable and pioneering efforts in rehabilitating the La Mesa Watershed, in restoring the Pasig River through cleaning the esteros and in launching the ecotourism sites in the 13 provinces all over the archipelago are testament to her dedication and passion to protect, conserve and promote the environment.

We wish our Chairman the best as she leads the DENR in the next six years in bringing about positive change towards the management, conservation and the utilization of our environment and natural resources to support the country's sustainable and inclusive development." 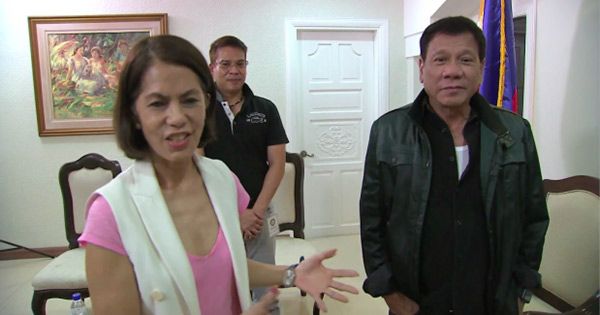