AlDub: Maine Mendoza, Alden Richards sing 'Imagine You and Me'

By Admin
June 18, 2016showbiz
Maine Mendoza and Alden Richards known as the AlDub love team sang the theme song of their first movie 'Imagine You and Me' in a duet number.

The performance during the Father's Day special of Eat Bulaga! on Saturday, June 18, sent kilig fans buzzing on social media as #‎ALDUBEBFathersDay‬ became the top trend on Twitter nationwide.

In 'Imagine You and Me', which was shot in Italy, Maine and Alden play Gara and Andrew whose paths cross in that European country. Gara is a certified 'NBSB' or 'No Boyfriend Since Birth' young lady in the romantic film.

Maine wrote the lyrics of the theme song while the music and arrangement were done by actor-comedian and Eat Bulaga host Vic Sotto and award-winning musician Jimmy Antiporda, respectively.

'Imagine You and Me' is set to hit theaters on July 13, three days before AlDub's 1st anniversary on July 16, which also marks the phenomenal pair's 48th Weeksary.

Here's a video of AlDub's duet performance, followed by the movie trailer: 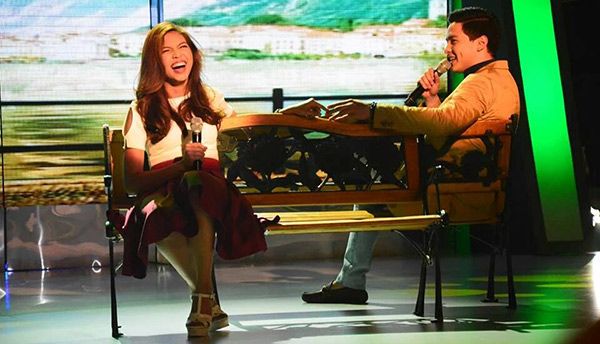