By Admin
May 18, 2016newsphotosviral
Photos that show Senator Antonio Trillanes IV being spotted at the airport while allegedly leaving the Philippines have gone viral online. 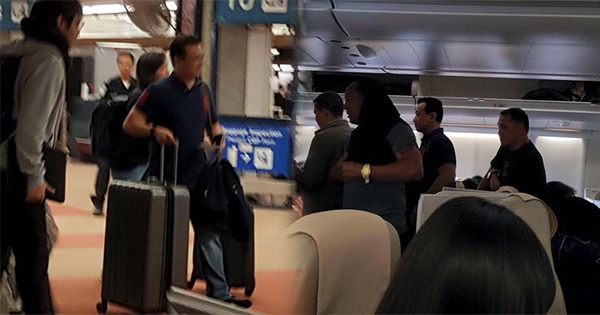 The senate member, who lost his bid for the vice presidency in the 2016 elections, is facing treason and espionage charges along with President Benigno Aquino III for undertaking "back-channel talks" with China.

The complaint, which was filed by supporters of then presidential candidate now presumptive President Rodrigo Duterte at the Office of the Ombudsman, said "Trillanes met with the Chinese 16 times, and he requested that the meeting [be kept] secret."

"In those meetings, Trillanes made mention that the Philippines cannot enforce coastal protection. And that made the Chinese take an aggressive [stance] and take over our areas like Scarborough Shoal and Spratly Islands. That alone constitutes treason," according to one of the complainants.

In a statement, Trillanes called the treason charge a "misdirection."

"Duterte knows that my message struck him at the heart of his fraudulent image so he is trying to smear my name as the messenger," the senator said. "It also showed his gross ignorance about the issue."

Trillanes admitted that he was appointed by Aquino "as a backchannel negotiator to deescalate the tense situation in Panatag back in 2012."

"I was able to accomplish my mission, within the authority given to me by the President and without compromising our territorial claim, which is now the main subject of our Arbitration case," he added.

Several days after Trillanes conceded in the vice presidential race, pictures of him allegedly fleeing the country circulated.

The senator or his camp has yet to release an official statement about the controversial photos. Some netizens speculated that he just left for a vacation.