By Admin
May 20, 2016newsvideoviral
A classroom building and the concrete fence of Pablo Litigio Elementary School in Pagadian City, Zamboanga del Sur collapsed due to heavy rains. 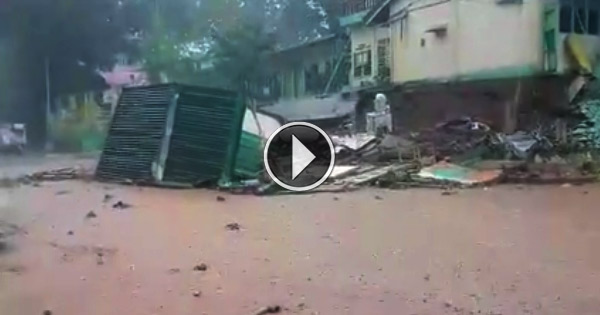 Juli Besite Penaranda, who posted a video on the Pagadian Black Market Facebook group on Thursday, May 19, said the incident occured around 4 p.m.

Based on the four-minute clip, it appears that water brought by heavy downpour softened up the soil underneath the building causing it to collapse after the concrete fence cracked and fell down.

Fortunately, no injury or death was reported because it occured during the summer break. Motorists passing by the school at that moment were also lucky to have been spared from tragedy.

Onlookers who are heard talking in the background including the person who took the video received criticisms for lack of concern. A netizen commented that they should have at least warned passersby or called the authorities so that a road block can be set up to avoid accident.

The video has gone viral, garnering more than 700 shares and thousands of views on Facebook.

There is no word yet coming from the school administration, education department, or local government to shed light on the matter.