By Coolbuster
May 27, 2016newsphotoviral
Senator Juan Ponce Enrile was caught playing "Bejeweled" during the canvassing of votes at the House of Representatives on Thursday, May 26.

The lawmaker was holding an iPad with the tile-matching puzzle game running, as shown in the picture taken by Rappler photographer Joel Liporada which was posted on Facebook.

Enrile was playing "Bejeweled" at the time when he is sitting as member of the National Board of Canvassers during the canvassing of votes for president and vice president at the Batasang Pambansa session hall. 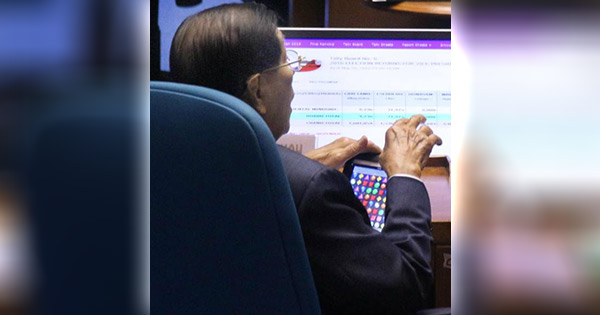 The photo has gone viral, garnering more than 10,000 likes and reactions, 2,000 shares and over 1,300 comments as of 3 p.m. Friday. It has also sparked an online debate on whether or not the senator's act was acceptable.

CHR be like: "Its his right to enjoy and have fun with all that stress as a senator."

That's unethical and unprofessional especially he belongs to the senate.. If he's bored why not take a vacation somewhere.. He shouldn't mix business with pleasure.

What a disservice to the filipino people.

According to Ivan Ramirez

I'm sorry, but this is not cute or funny...I'm not being "O.A." but we are talking about canvassing of votes for our future leaders...and this old man didn't even care at all...And what do you expect from this guy? He betrayed our country when he turned his back on our country and join the Japanese military...He joined the Japanese colonizers to protect himself...And until today he still betraying our country through corruption...This filthy old man don't deserve respect at all.

Not on Enrile's side but what can you people, who are against this, suggest to all the people bored all day in a room doing nothing?

Don't be PREPOSTEROUS and SUGGEST something they CAN do productively during canvassing, especially Enrile at his age.

Enrile is 92 years old. And this is not the first time that he was caught playing "Bejeweled" while performing his duty.

It happened in August 2013 while the senator was waiting for his turn to question resource persons at a Senate blue ribbon committee inquiry on foreign officers and labor attachés who allegedly abused female overseas Filipino workers.

He also played the game on his tablet while Senator Miriam Defensor Santiago spilled vitriol at his direction during her privilege speech in December of the same year.

In October 2015, the Senate Minority Leader was again caught playing "Bejeweled" on his tablet during the Senate’s last day of session before a three-week break.

In previous interviews, Enrile revealed that playing "Bejeweled" is his way of keeping his mind sharp. He learned the game after a staff at his former law office installed it on his tablet.

"I've been doing this for quite some time to exercise my diminishing intellectual capacity," he told reporters.