By Coolbuster
April 11, 2016newsvideoviral
Two pairs of bus drivers and conductors engaged in a fist fight in the middle of the road. The brawl was caught on video that has gone viral.

Although details about the action-packed scene were initially sketchy, the video taken by a certain Christian Agtuca was spreading via social media like wildfire.

Netizens poked fun on the bus drivers and conductors, and called the fight a "royal rumble" and "hangover" of the boxing match between Manny Pacquiao and Timothy Bradley which was seen live on cable in the Philippines on Sunday morning, April 10.

The video was posted first on the Facebook page of motoring magazine Top Gear Philippines on Monday afternoon, April 11.

"These are the men licensed to transport the commuting public. They'll recklessly jostle each other on the road, and then engage in a fistfight when their vehicles make contact. LTO, please do something about this. You issue professional driver's licenses to uneducated individuals with violent tendencies--and entrust people's lives to them. Something is seriously wrong here," the caption reads.

In a comment, the page admin revealed that before the incident took place, the bus drivers "kept jostling for position--until they made contact."

"This fight video shows us the mental state these bus drivers are constantly in. Always ready to boil over. These are the people holding the steering wheels of huge vehicles that are potentially deadly weapons," TGP wrote.

Netizens have called the attention of the Land Transportation Franchising and Regulatory Board and asked the agency to investigate the incident. 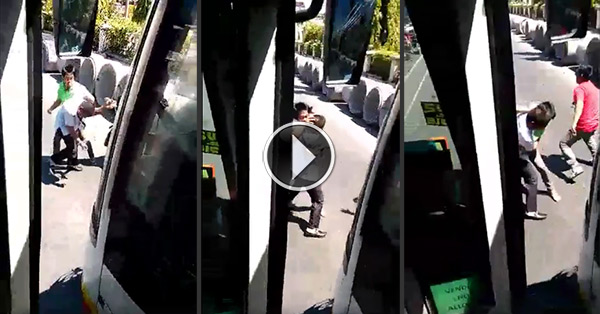 OUR BUS DRIVERSPosted by Top Gear Philippines on Sunday, April 10, 2016