VIRAL: Ice Candy Man belts out 'Do I Have To Cry For You'

By Admin
April 29, 2016newsvideoviral
A video featuring a street vendor who calls himself Ice Candy Man belting out the Nick Carter hit "Do I Have To Cry For You" has gone viral. 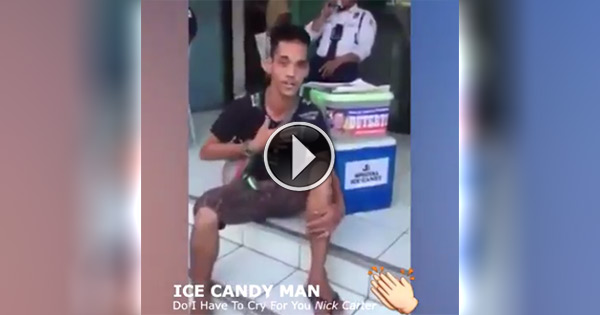 Netizens praised the unidentified ice candy vendor for sharing his singing talent to the world. Some said they wanted his story to be featured on GMA-7's weekly magazine show "Kapuso Mo Jessica Soho" (KMJS).

The video, which was posted on Friday, April 29, on the Tee Radio Facebook page, quickly amassed over 1,000 views in less than 30 minutes.

Ice Candy Man was admired by viewers not only for his amazing voice but for putting a campaign sticker of leading presidential candidate Davao City Mayor Rodrigo Duterte on his plastic containers.

Watch him perform "Do I Have To Cry For You" in this viral video: