By Admin
April 13, 2016newspoliticsvideoviral
Presidential candidate Jejomar Binay made a desperate move by urging the public not to vote for his rival, Davao City Mayor Rodrigo Duterte.

In a video titled "Right to Life," posted by a Facebook page promoting Binay's candidacy, the Vice President said voters should not elect Duterte because the latter will continue to kill children, the poor and the illiterate based on mere suspicion.

Binay said Duterte did not deny that he is leading the Davao Death Squad and his statement to put those who will violate the law to death without due process is worse than Martial Law. 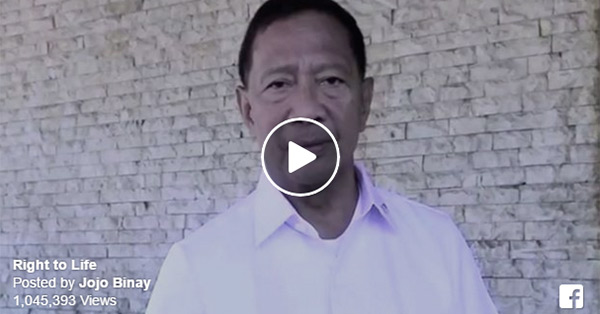 Binay's new video, which garnered over a million views as of 3 p.m. on April 13, was released after news came out that Duterte topped the latest Social Weather Stations (SWS) and Pulse Asia pre-election surveys.

The SWS poll conducted on March 30 to April 2 saw 27% of the respondents choosing Duterte. Senator Grace Poe is second with 23%, Binay third with 20%, Liberal Party standard bearer Mar Roxas 4th with 18%, and Senator Miriam Defensor Santiago fifth with 3% only.