By Coolbuster
April 14, 2016newsvideoviral
Two pairs of male and female Cuban children were caught on video twerking and dancing provocatively inside their classroom and school campus.

The viral video, originally posted on Facebook by Jorge Luis Pérez, father of one of the boys, was taken in the city of Camaguey in central Cuba, 300 miles east of Havana, the Daily Mail reported.

In it, two girls and two boys in school uniform can be viewed performing some dance moves seen in music videos. 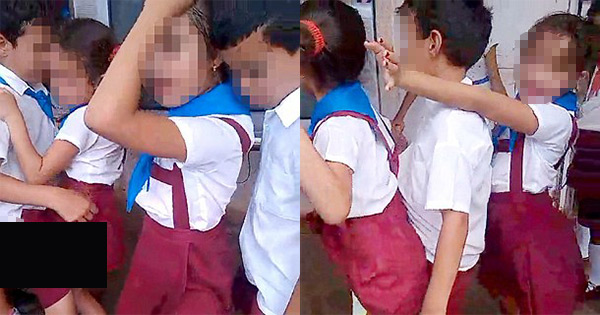 They were supposed to be innocent, that's how it should be considering their tender age, but it's quiet shocking to see the Cuban children twerking, grinding and bending down on the floor in a lewd manner.

Pérez has deleted the video when it sparked outrage online. However, copies of the video circulated quickly after it was downloaded and reposted on social media sites such as Facebook, Twitter and YouTube.

It is yet to be known whether the school administration and community officials already took action on the controversy that caused fury among many parents.