By Admin
April 29, 2016newstrending topic
The Bank of the Philippine Islands has issued a statement amid a call for bank run from the supporters of Davao City Mayor Rodrigo Duterte. 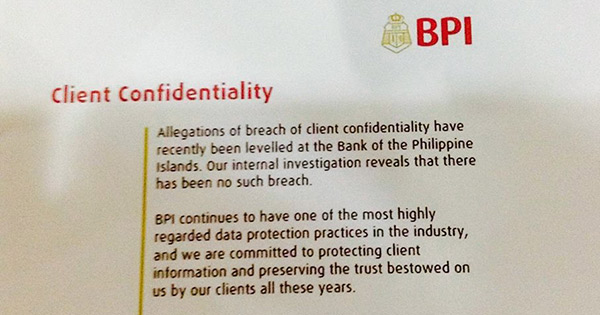 "Allegations of breach of client confidentiality have recently been levelled at the Bank of the Philippine Islands. Our internal investigation reveals that there has been no such breach," BPI posted on its Facebook account on Friday, April 29.

"BPI continues to have one of the most highly regarded data protection practices in the industry, and we are committed to protecting client information and preserving the trust bestowed on us by our clients all these years," the bank stated.


This happened after Senator Antonio Trillanes IV made public Duterte's bank account at BPI Julia Vargas branch allegedly containing P211 million. The presidential race front-runner admitted that he has a BPI bank account but denied it has a deposit worth millions.

Duterte supporters who have deposits at BPI reportedly said they no longer trust the bank. Some claimed they already closed their accounts while others asked BPI to sue Trillanes for exposing depositor information without permission.

Duterte dared the senator to execute an affidavit and disclose who his informants are, where and when he got his information and why he released it. The presidential aspirant said he will make public his BPI account once Trillanes files a statement under oath.

In an interview, Trillanes promised to resign from the Senate and withdraw from his candidacy if his allegations against Duterte are not true. He also warned of filing an impeachment case if Duterte will be elected president.