After dumping Binay, One Cebu picks Duterte for president

The announcement came two weeks after One Cebu severed ties with the United Nationalist Alliance (UNA) over neglect of Binay's political party on its duties as a campaign partner.

One Cebu Party head and gubernatorial bet Winston Garcia had a late-night meeting with Duterte in Cebu last Saturday, April 2. He told members of media that they will deliver one million votes for Duterte, ABS-CBN News reported.

Garcia said the party will do for Duterte what it did for former President Gloria Macapagal Arroyo, who got more than a million votes during the 2004 elections. 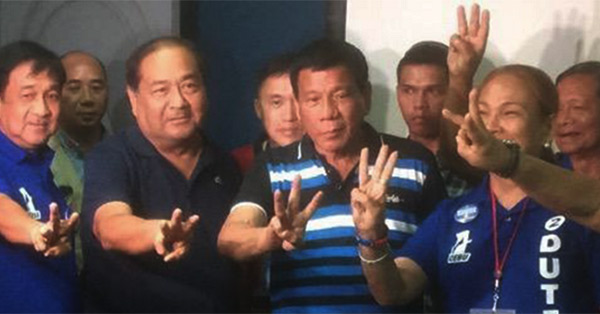 PDP Laban presidential bet Rodrigo Duterte and the One Cebu party led by its gubernatorial candidate Winston Garcia formally announced its support for the Davao City Mayor, vowing to deliver a one-million vote difference in the May elections.

Garcia said that the party reached its decision to throw its support behind Duterte after meeting with him late Saturday, during which it "became a logical and clear stand for One Cebu to support one of its own, and a Bisaya for President."

"WinNer ta, Duterte pa," said Garcia, who stressed that the party made its decision to back Duterte, who traces his roots to Danao, after an extensive and thorough consultation with members and the burgeoning supporters of the party.

"Kabahan na kayo," an ecstatic Duterte said, referring to his presidential rivals, after being informed of One Cebu's overwhelming decision to back him. Duterte has Senator Alan Peter Cayetano as his vice presidential running mate.

Garcia said that the Cebuanos will do for Duterte what it did in 2004, "History will repeat itself in this election" said Garcia, referring to the one-million vote difference which the party delivered for the presidential winner of 2004.

Garcia said One Cebu's platform, ideals and vision are in perfect sync with the Duterte's platform of government, especially on infrastructure. Cebu at present has 2.7 million registered voters.