OFW wants to get pregnant with baby from Duterte

By Admin
February 12, 2016newsviral
An overseas Filipino worker who supports Rodrigo Duterte said in a post she wants to get pregnant with a baby from the presidential candidate.

"I love you Duterte, I hope you will give me a child because I so like your breed. Where are we going to have a date?" Jamaica Rose, an OFW in Jeddah, Saudi Arabia, asked in Filipino. 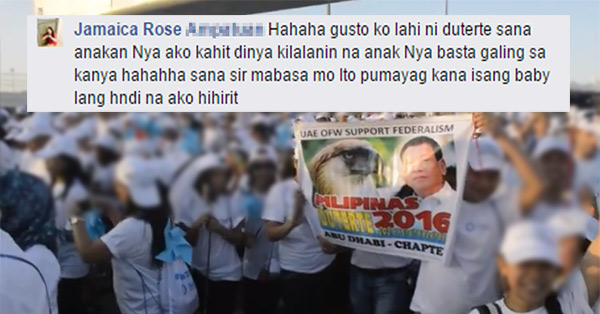 Jamaica hopes Duterte will be able to read her comments on Facebook.

If the mayor would grant her request, she promised to have five carabaos (water buffalos) slaughtered for food in exchange for one baby.

She said it will just be fine even if Duterte will not recognize the baby as his own.

The OFW admitted that she felt envious with women whom Duterte had kissed before as they already tasted his lips.

Most of her fellow OFWs considered it a joke, but Jamaica said that just like Duterte, she keeps a word of honor.