WATCH: LED bulb lights up without electricity, just a finger or water

By Admin
February 28, 2016newsvideoviral
One video is getting much attention on Facebook. It's about a LED bulb that lights up without electricity, just a finger or drinking water.

The man in the video, which has already raked over 60,000 views in 4 hours, demonstrates how his "magic bulb" produces light by putting a finger on the tip or placing it on a glass of plain water.

He included children in the demonstration as he tries to prove that there is "no magic" involved. Towards the end, he said it's for sale and anyone interested may search for "magic light" on Facebook. 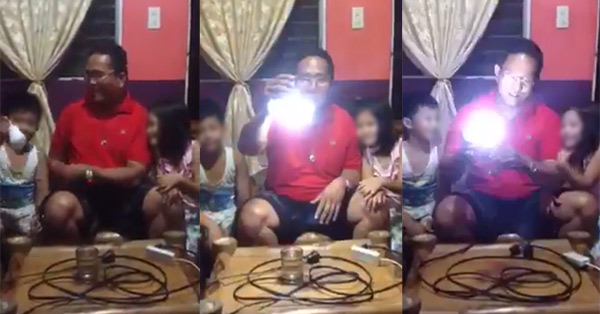 The Facebook page where the video was re-uploaded claimed that the bulb is the Filipino man's "invention." However, some netizens reacted negatively and said otherwise.

According to a certain Ian Luna, the bulb has a battery and an On/Off switch. Leo Ruado said it is "rechargeable" and with a "remote controller." JC Lazaro added that it can be bought in "magic shops" in Divisoria and Baclaran.

Sean Cuñado, who has a tech business in Bohol, called it the "intelligent emergency LED bulb" which has a "life span of 50,000 hours or 5-6 yrs." He revealed that it has a battery and can function using electrical currents generated by the human body.