By Coolbuster
February 01, 2016newstrending topic
Members of the religious group Iglesia Ni Cristo turned to social media to urge others to boycott ABS-CBN over what they call "bias reporting." 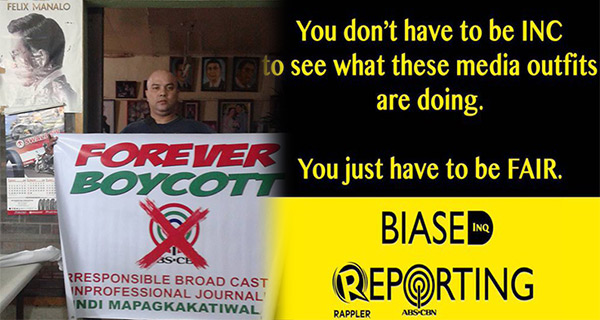 The broadcast network is among several local news organizations that covered incidents involving former INC minister Lowell Menorca, who earlier claimed that he was abducted on orders of INC leaders.

INC spokesperson Edwil Zabala denied the boycott order, Inquirer.net reported. He said the church leadership did not issue a circular about the subject.

Despite the absence of a written directive, INC members used Twitter and Facebook to air their sentiments against the Kapamilya network. The hashtag #BiasABSCBN became a trending topic nationwide on Monday, February 1st. Earlier, the hashtag #BoycottABSCBN also entered the trending box.

ABS-CBN has also been accused of biased news reporting to favor certain politicians.

"We're calling them #BiasABSCBN because they attack anyone who's not in favor of their presidential bet," netizen Heide Canlas-Lazaro tweeted.

Some INC members also said they are switching from SkyCable to CIGNAL for cable TV subscriptions.

So far, the network gave no word on the issue.

Here's some more tweets with the trending hashtag:

You don't have to be INC to see what these media outfits are doing. Just be fair! Stop Biased Reporting #BiasABSCBN pic.twitter.com/hFbbmFkkSt
— jvesolitario (@jvesolitario) January 31, 2016

No matter how you deny it, God will make a way for you to feel it!#BiasABSCBN pic.twitter.com/kJBBsBnwxo
— Philip Alva (@philipalva) February 1, 2016

If your news will be literred with side comments, better change your motto and call yourselves 'opinion station' #BiasABSCBN
— Jem (@Ell3Rica) February 1, 2016

If you'll be open-minded about it, you'll get why we are boycotting ABS-CBN. We do not do these kind of activites without basis #BiasABSCBN
— jj (@JJJaraza) February 1, 2016

I am not an Active Twitter User, But will do everything for my FAITH, and For God, For Christ and HIS Church Administration #BiasABSCBN
— Zhaj Zaragoza (@HeyZhaj) February 1, 2016

You are hurting the entire country not just the INC with ur irresponsible journalism.Now is the time to do what is RIGHT. #BiasABSCBN
— gicarjay magbanua (@gicarjay) February 1, 2016